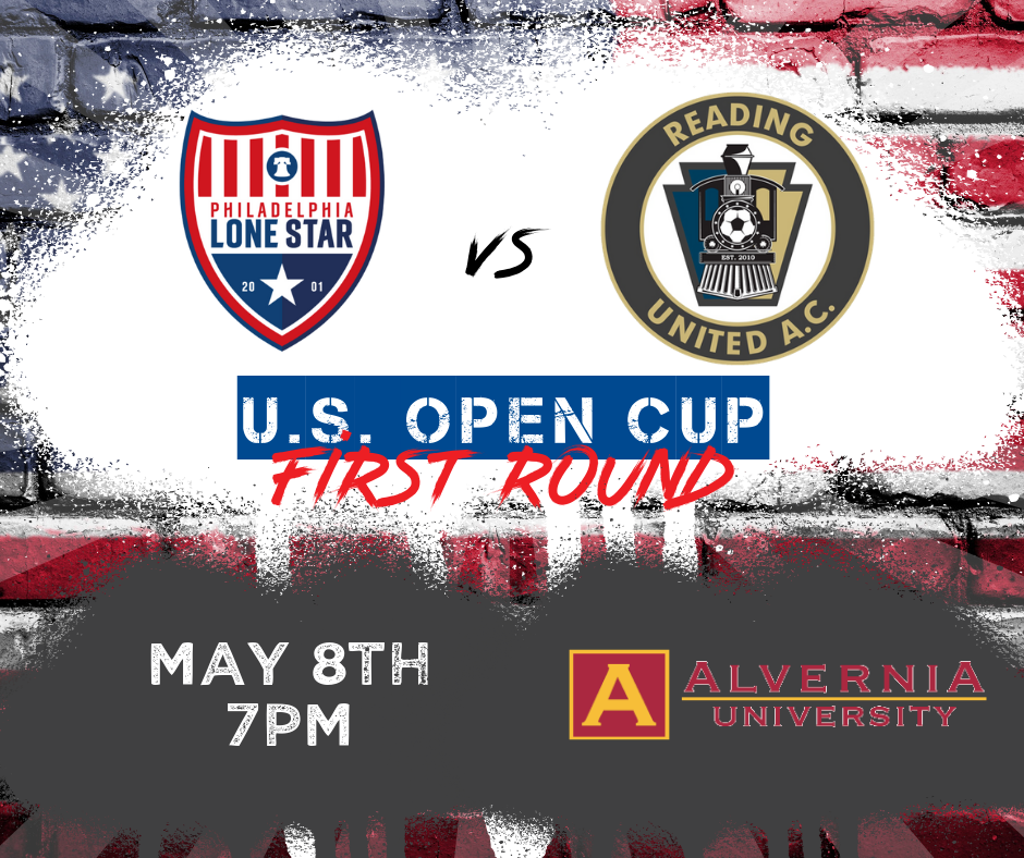 READING, PA (April 10, 2019) – U.S. Soccer dropped the initial pairings for the Lamar Hunt U.S. Open Cup’s first round on Wednesday afternoon, and Reading United’s foe will be a local one. Philadelphia Lone Star will travel to Reading for an opening round appearance on May 8th at 7:00pm. The game will be hosted by Alvernia University for the second consecutive year. ESPN+ will be broadcasting the livestream on their platform, as part of a multi-year deal with U.S. Soccer to showcase every single game of the tournament.

This will be Reading United 11th consecutive appearance in the U.S. Open Cup, a modern era record for an amateur team. Reading also comes into the tournament on a seven-game win streak in the opening round, a feat that stretches to 2012. Overall, this will be Reading’s 13th trip to the national tournament.

Reading United advanced to the second round of the Open Cup last season, defeating USASA qualifier Christos FC 1-1 (5-4 PKs), surviving an early 5th minute goal. United would take on USL-side Richmond Kickers in the next round, where Reading largely dominated a rain-soaked affair, but fell short in PKs this time around 1-1 (3-4).

“The Open Cup is a great platform for our players to showcase their abilities on a national level,” stated United head coach Alan McCann. “We’re looking forward to getting started against Philadelphia Lone Star.”

Philadelphia Lone Star will be making their second appearance in the Open Cup as a club, but their first since joining the NPSL last season. Their previous appearance as a local qualifier ended in a 3-1 loss to Ocean City Nor’easters in 2017. The team qualified for its first-ever playoff appearance in 2018, losing the Keystone Conference semifinals to West Chester United in penalties. Lone Star finished their 2018 NPSL season with a 8-2-0 record.

Reading has faced NPSL sides on four occasions in the Open Cup, coming away victorious in each instance. The last time Reading faced an NPSL team in the tournament, was a 1-0 victory over Clarkstown SC Eagles in 2017, a win which set them up to be giant-killers in the second round against reigning NASL champion New York Cosmos.

“We are excited for the opportunity to compete against a team like Philadelphia Lone Star,” said Reading United vice president Art Auchenbach. “They’ve proven their ability to have success at the amateur level, and it will be a great matchup between two of the top amateur teams from our region in the first round of the Open Cup.”

The Lamar Hunt U.S. Open Cup, recognized as U.S. Soccer's National Championship, is an annual competition open to all amateur and professional soccer teams affiliated with U.S. Soccer. The tournament has crowned a champion for 105 consecutive years dating from 1914. In 1999, the competition was renamed to honor American soccer pioneer Lamar Hunt.