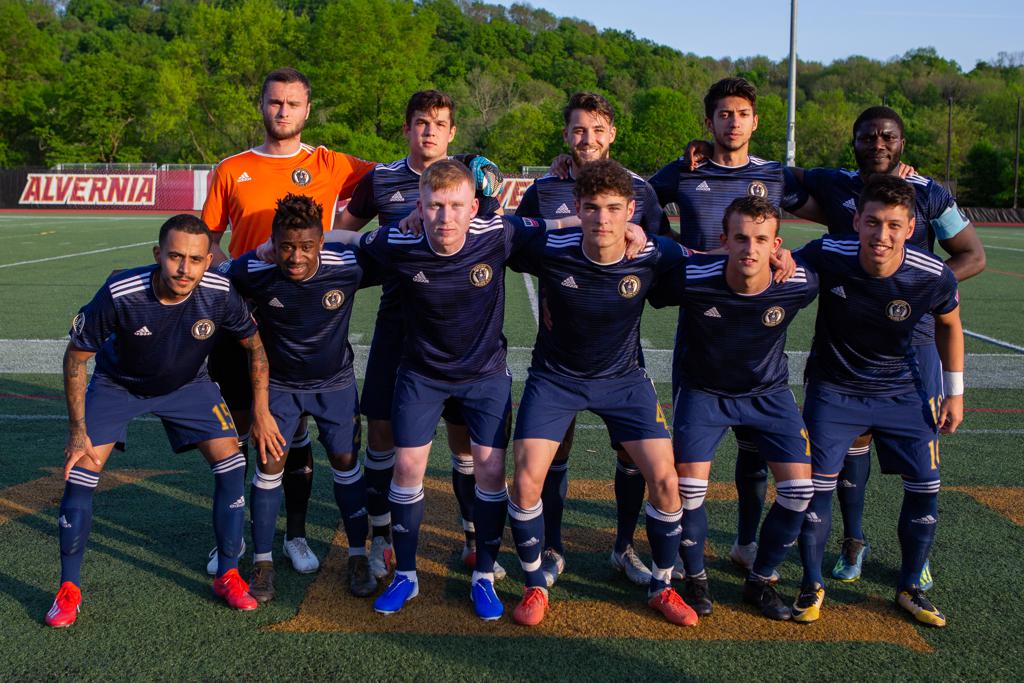 READING, PA (May 8, 2019) – A dominant first half performance and a resolute second half defensive effort helped Reading United upend visiting Philadelphia Lone Star to score a 2-1 win in front of a delighted home crowd at Alvernia University Stadium in the first round of the 2019 Lamar Hunt U.S. Open Cup.  Jeremy Rafanello led United’s attack, scoring twice in the first half, to help Reading advance to the second round of the Open Cup competition for the eighth consecutive season, setting up a showdown with the two-time defending USL champions, Louisville City FC.

The hosts began the match in imperious fashion, heaping pressure on the Lone Star defense from the opening whistle.

Aaron Molloy, now in his fourth season with Reading, nearly opened his account just seven minutes into the new season. The Irish midfielder hit a blistering free kick that forced an acrobatic save from Philadelphia goalkeeper Vincent Tasco.

Minutes later, returning forward Gilbert Waso settled a ball in the Lone Star penalty area and laid off a sumptuous pass for fellow returning midfielder Kalil Elmedkhar, but the Kentucky standout blasted his shot over the crossbar.

United would finally breach the Lone Star defense in the 18th minute. Midfielder Felipe Hideki made a darting run into the Philadelphia penalty area. His progress was stopped by a swarm of Lone Star defenders but Hideki got off a quick pass to the right where Rafanello unleashed a vicious blast past Tasca to stake Reading to a 1-0 lead.

Two minutes later, Hideki again troubled the Lone Star defense and was fouled in the penalty area leading the match official to point to the spot. Rafanello sent Tasca the wrong way and cooly slotted his spot kick into the net to make it 2-0 to United.

Philadelphia Lone Star would not go quietly and rallied in the second half. The visitors had a great opportunity to halve Reading’s lead in the 66th minute. Anthony Allison slipped past the United backline and found himself one-on-one with Reading goalkeeper Tor Erik Larsen. A timely intervention by veteran Reading defender Lamine Conte denied Allison’s chance.

Three minutes later, a mix-up in the Reading defense gifted Philadelphia a lifeline. United defender Richie Schlentz misjudged a pass and allowed Deron Joe to send a rasping shot Larsen’s way. The Reading goalkeeper did well to parry the effort, but Shawn Genus tapped home the rebound to cut Reading’s lead to 2-1.

With momentum on their side, Lone Star continued to harass the Reading defense. Marco Bla spotted Larsen off his line in the 82nd minute and tried to loop a ball over the Reading keeper. Larsen made a leaping save but conceded a corner kick.

The visitors had the ball in the net on the ensuing corner kick, but the linesman’s offside flag denied Philadelphia the tying goal.

Following a reckless challenge in the 87th minute, Yaya Fane was shown his second yellow card of the match and given his marching orders by the match official.

Despite being down a man, a determined Lone Star team forced United to defend bravely in the game’s dying minutes but the hosts would hang on to secure the win and will now travel to Louisville, Kentucky to face the two-time defending champions of the USL Championship, Louisville City FC, in the second round of the 2019 Open Cup on Wednesday, May 15th.