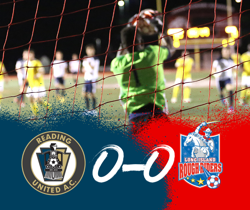 HEMPSTEAD, NY (June 9, 2019) - In a much dryer affair than the rescheduled Wednesday evening game would've been, both Reading United and Long Island Rough Riders struggled to get started offensively. Reading managed the game's only shots on frame in a 0-0 draw at Hofstra University.

Playing their second game in less than 24 hours, Reading came out with a completely different starting lineup than the night before. The lack of playing time with this unit was a bit stifling on the offensive side, as the last game a similar lineup was placed on the field was 12 days earlier in a 1-0 victory over Cedar Stars Rush. A planned break the previous weekend and rescheduled match against Long Island during the week spelled Reading United for longer than anticipated to open the USL League Two season.

One thing that hadn't changed was Reading's steely resolve on defense. A smothering defensive unit impressed on the road against the Rough Riders, holding the Long Island squad to zero shots on frame. Jahmali Waite, the goalkeeping nominee on the most recent USL Team of the Week, collected his third shutout in three starts. Only Tormenta FC 2's Sawyer Gaffney can claim the same stat line with at least three starts.

Reading will be on the road for the fifth time in seven games, facing an FA Euro squad that has already been downed once by the Blue and Gold. The 3-0 victory over FA Euro snapped a three game unbeaten streak for the Brooklyn-based side, who have been solid, albeit unspectacular at home. FA Euro has collected three ties to their credit in four home dates, which still keeps them firmly in the Mid Atlantic Division pack, which is bookended by Reading United's 16 points and Evergreen's 1.

Reading returns home for Kicks Against Cancer Night on Saturday, June 15th against Ocean City Nor'easters. The 7pm kickoff will feature the team wearing special black and gold jerseys to support the Anthony Myers Fund. The jerseys will be auctioned off during the game, with proceeds benefiting the Berks Catholic football player's charity efforts.