Back-to-Back division titles for Reading, and third in four years 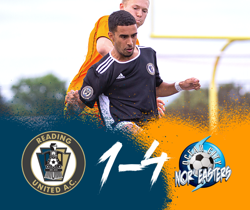 Both teams had their fates determined prior to their Sunday night kickoff, with Reading clinching the Mid Atlantic Division on Saturday evening by ways of Long Island's 0-0 draw with Evergreen and Ocean City's outside shot at playoffs dashed with the Northeast Division's GPS Phoenix pulling out a 5-4 victory over Westchester. Though judging by the performance last night in the 50th all-time meeting between the two clubs, Ocean City looked like they had more to play for.

The Nor’easters offense came out strong taking the lead in the 2nd minute of play, when Claudio Repetto shot the ball to the back of the net. The Nor’easters continued to dominate, when Deri Corfe scored, making the score 2-0 Ocean City. Goncalo Garcia went for the goal and just missed, leading to a corner kick. It was then United’s hand-ball that led to a penalty kick that ended in Ocean City’s favor, when Deri Corfe scored again making the score 3-0.

It wasn’t long after that when the shade on the field grew darker. United’s Felipe Hideki received a yellow card, Reading’s only out of the 5 issued during the match. The halftime break was much needed for United, hoping to take the second half by storm with a stronger performance. Things were bleak, with forwards Simon Becher and Will Baynham leaving the match early due to knocks picked up in the first half hour of play.

Another ball hit the back of Jahmali Waite’s net in the 71st minute of play. Ocean City’s Deri Corfe punched in his third of the game, his first non-PK goal of the match, putting the game out of reach.

Nearing the end of the match, newly-signed player, Bakary Bagayoka, gave United their only goal of the night in the 90th minute of play.

Reading will return home to Gurski Stadium for their match against Cedar Stars Rush on Wednesday, July 10th at 7:00 p.m. The night will feature throwback Reading Rage jerseys worn for warm-ups, a throwback playlist, and more!