United will travel to Statesboro, GA to tangle with Southern Conference champs 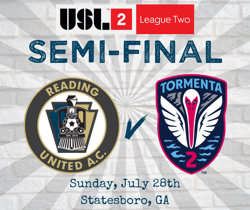 Reading advanced to the USL League Two Semi-Final after clinching their second consecutive Eastern Conference crown this past weekend at Gurski Stadium. They outlasted GPS Portland Phoenix in the conference semi-final round, overcoming a one goal deficit at halftime and a park-the-bus mentality from the visitors to tie the game early in the second half, and advance 4-3 in penalty kicks. Goalkeeper Simon Lefebvre was cold-blooded in the PK session, stopping two Phoenix shots, while midfielder Yaya Fane punched in the game winner in the fifth round. Reading would win their fourth Eastern Conference title in team history behind a 1-0 effort against the previously unbeaten Western Mass Pioneers, riding a Khori Bennett goal in the 43rd minute to victory at home.

Tormenta had an easier task in the Southern Conference, dispatching of 2018 PDL Semi-Finalist The Villages SC by a 3-1 scoreline in the conference semifinals, then thrashing the previously undefeated Brazos Valley Calvary FC 5-1 in the final. The conference title is Tormenta’s first in their short history, a fitting cap to a 10-2-2 season which saw them outscore their opponents by a 22 goal margin in the regular season.

This will be the first meeting between Reading United and Tormenta FC 2, but the clubs share a common thread with Tormenta midfielder Marco Micaletto, who spent his 2017 season in Reading, his 2018 season with Tormenta’s PDL-side, and 2019 with the Statesboro, GA based club’s USL League One team.