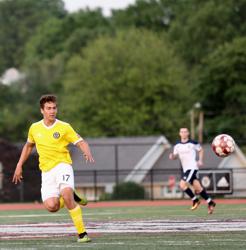 New players on Reading United AC’s 2019 roster gave the team a huge boost en route to their second consecutive conference title. These players have been leaving a lasting impression on USL League Two, fans, and their coaches so far this season. Simon Becher, a new striker for United, had came out in full force leading the team in goals, points, and shots.

The speedy striker was surrounded by soccer growing up since his siblings, parents, and uncles all played in a college or professional level. He would be at games, practices, and tournaments always playing with his older siblings as he commented, “I was born into [soccer]. It was always soccer for me, no other sports.”

The Brooklyn Connecticut native started his youth soccer career at the age of 13 with Oakwood Soccer Club. During Becher’s time with the club, his coaches still leave a lasting impression on his career today,
especially the coaches, “Coach Kevin Bacher worked with me on my game whether it was during the season or in the summer. He took his own time and went above and beyond what most coaches do. He
instilled that work ethic that there is always work to be done if you want to get to the next level.”

Becher came to Reading after his freshman year at Holy Cross where he accumulated 16 points, seven goals, and two assists in 17 games. After this season he led the team with 16 points and was named to
Patriot League Rookie of the Week in mid-September, along with being named Crusader of the Week.

After this season in Reading, the previous Holy Cross star will find himself transferring to St. Louis University to continue is academic and athletic career. St. Louis is his home away from home as he spent
summers visiting family and growing up in the soccer filled culture. The upcoming St. Louis sophomore has some family history in the area as well, his uncle and grandfather are in the Soccer Hall of Fame.

Looking into his upcoming season with SLU Becher mentioned, “The program has a rich history and I believe that the coaching staff and players at SLU have the potential to do big things this year.”

However, Becher is first committed to his summer in Reading as he was placed on USL League Two’s Top 100 Players to watch. During the strikers first season, he led the team in goals, two goal games, points, and shots. Head Coach, Alan McCann, points out that, “[Becher] had come in and consistently improved each week which put him in a rich vein of form. He had been able to prove himself as a handful to any defensive unit whether it's starting or coming off the bench which is a very good addition to any team.”

Reading’s lead scorer hit the twine seven times this season, tied for the team lead with Felipe Hideki. To continue finding the back of the net Becher noted, “[The team] work[s] everyday in front of the goal and work[s] on developing that strikers instinct. That way during the games and big moments finding the net is second nature.” Becher was able to come out and prove himself as being a strong striker, now Coach McCann says, “[Simon] can not rest on the performances he has had but look to the next one for higher and higher levels.”

To stay prepared for practice and games Becher finds that, “the mentality has to be that you’re here to get better. Everyday there’s a very high standard that is held by my peers and coaching staff of every player. That’s the mentality we carry everyday and I think that contributes to our success.”

The environment of the training atmosphere gets carried out by all training staff and can make a big difference on an outcome of the game.

Coach McCann comments “We never look too far ahead in our environment. Regardless of the situation, opponent, or occasion it is always about full focus on the next game and what we can do in that game to showcase our abilities.”