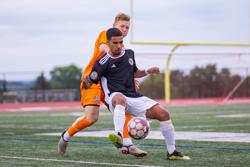 The final whistle blows and the joy of another victory or the sudden pain of a loss sets in. 90 minutes gone and the results are final as the team heads back to the locker room. Players grab ice and start talking about what went wrong or what went well as they change out of their uniforms. Teammates begin to leave the locker room, except for Goncalo Garcia, who can be seen on the phone making sure he lets his family know how the match went.

Goncalo is from Lisbon, Portugal and came to the U.S. two years ago to pursue soccer and an education. During his upbringing in Portugal he lived with his parents and two brothers, who are all very important to him. He spoke highly of his childhood and said he remembers a lot of great moments.

“I had a great childhood and I have so many great memories,” Goncalo said. “I remember playing soccer with my brothers in the backyard.”

He also remembers his friends at school and often going to a park to practice soccer with his father. When Goncalo got older and decided to move to America, his family became his biggest support system. He said they are the last ones he talks to before a game and the first ones he calls when the game ends. Goncalo expressed how thankful he is for his family and everything they taught him.

“I have such a great family, they are for sure one of my biggest inspirations, motivations, and my support,” Goncalo said.

After arriving in America, the next big step for Goncalo was his decision to attend Lenoir Rhyne University in North Carolina. He would be studying for his Master’s in Business Administration while playing collegiate soccer. The balance between school and soccer came easy to Goncalo with the help of a supportive coaching staff. His first year at Lenoir Rhyne ended up being a memorable one with the team winning their first conference championship.

“I had the opportunity to have really great moments on and off the field with a really nice group of guys,” Goncalo said.

The upcoming season for Goncalo at Lenoir will be his last and he said he’s excited to strive for personal and team goals. He looks forward to having an incredible personal season as well as helping take his team to another championship.

Goncalo has also had a very successful season thus far in Reading. He led the team with four assists in the regular season, and provided the game winning helper in the Eastern Conference Final. He has no doubt been an offensive threat and continues to show up on the stats sheet. Goncalo said his season in Reading has been amazing and given him opportunities to work with a lot of great people. When asked about his personal success and happiness he takes a very humble approach and relates it back to the team.

“Of course, it feels good to lead in assists because it’s important to have personal goals, but my biggest source of happiness is being first in our conference,” Goncalo said.

The unselfish forward went on to explain that his assists are a product of all the hard work the team has put in over the last few months. He said while it feels great to have so many assists what matters right now is the team.