Hummrich Adapting and Developing In America 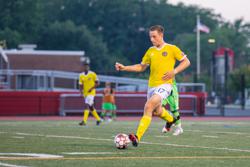 Much like many kids in Europe, Timo Hummrich had always dreamed of playing soccer at it’s highest level. Now, as he plays on Reading United, he sees this as a stepping stone to the next level of play. Coming over to the United States from Germany, Hummrich had to adjust to not only the different style of play but also the different atmosphere that soccer held.

From working endlessly on developing superb soccer skills to winning the German Youth Championship with his U19 team in 2018 in front of a packed stadium of 10,000 passionate fans, Hummrich has the diligence of European soccer to thank for where he is today. Though living in Germany helped Hummrich grow as a player, since living in the United States he has overcome challenges that developed his skills even more.

The differences in soccer culture may seem pretty apparent, but the speedy defenseman explained that there are many parallels’s between the sport in the US and in Europe. “The competitiveness reminds me of the training atmosphere back in Germany”, Hummrich described the level of play in the US. The technical abilities of his teammates and opponents is another notable similarity between the two countries that Hummrich made.

The physicality in the US is more prominent than over in Europe, Hummirch expressed, “Coaches here tend to lay a lot of focus on physical attributes like strength and speed”. As for the European coaches that mainly tend to focus on the tactical aspects of the game. Not only has he experienced differences in the style of play but also the way his teams have interacted. He described his teams in the US as having better team atmospheres than ones back home. Hummrich gave credit to his US teams by saying that they are “very welcoming and caring here”.

One of Hummrich’s first tastes of soccer in the US came from attending the University of Delaware and competing with their DI team. Hummrich explained that in Delaware he is equipped with excellent facilities that help him perform at his best. His favorite soccer experience in the US, so far, took place while playing on his college team. Hummrich told the story of how he netted two goals against Charleston, the second one being the goal that capitalized their victory in overtime. He praised his college team in saying, “The coaches are very knowledgeable and the team atmosphere is one of the best I have ever played in.” This praise seems to be well deserved as Hummrich earned CAA Rookie of the Year with the Blue Hens this past season.

This summer the twenty-year-old from Berlin, Germany has been competing in the USL League Two with the Mid Atlantic Division leader, Reading United. “The competitiveness”, was Hummrich’s response when asked what his favorite thing about his new club was. “Everyone wants to play and show that they deserve a contract for the affiliate teams.” He explained further that because of this it has created an aggressive training environment that empowers the players to improve and enhance their skills every day. Reading United has also provided Hummrich with some of “the best college players as training partners” and the opportunity to train with another Philadelphia Union affiliate team, Bethlehem Steel.

In the near future, Timo Hummrich would like to play at the same level as his favorite American and German soccer players, John Anthony Brooks and Bastian Schweinsteiger. From working hard in the fall with the Blue Hens to hitting the pitch in the summer with United, Hummrich’s dream doesn’t seem too far off.