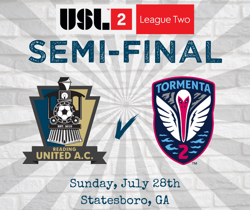 STATESBORO, GA (July 27, 2019) – After a long road trip to Georgia on Friday, Reading United is tuning up for their USL League Two Semi-Final match against South Georgia Tormenta FC 2 on Sunday evening. For Reading, this is the fourth semi-final appearance in team history, and second consecutive trip to the league’s showcase of the four teams remaining in the playoffs. Tormenta plays host at Erk Russell Sports Complex, in front of home fans anxious to witness the Southern Conference champions in their first league semi-final.

Reading advanced to the semi-final match after dropping GPS Portland Phoenix and Western Mass Pioneers in the Eastern Conference playoffs last weekend. United defeated Phoenix first, needing extra time and penalty kicks to knock out the playoff wild card. Reading followed up their performance on Saturday with a solid 1-0 victory over the previously undefeated Pioneers. A 14 game regular season, followed by two tight, physical matches against Northeast Division foes have a battle tested United squad eager to return to the USL League Two Final for a second consecutive season.

“Our lads have come through some difficulty in the regular season and the playoffs,” said Reading head coach, Alan McCann. “They are another group we have had that enjoy the big and difficult tests.”

Tormenta FC 2 advanced to the semi-final after breezing through the Southern Conference playoffs, dispatching of The Villages SC 3-1 in the semifinal, and previously undefeated Brazo Valley Calvary 5-1 in the final. The Statesboro-based club is paced by midfielder Luca Mayr, who has scored eight goals with four assists en route to being named the league’s #33 prospect. The club won their second straight Deep South Divisional crown this season, after outscoring their opponents 33-11, including a +14 margin at home.

“We expect tomorrow’s game to be another one of those tests against a team that can be very good going forward,” McCann added.

The game will kickoff at 8pm, and will be streamed online at readingunitedac.com/livestream.