United Rallies Past Tormenta 2 Into Final 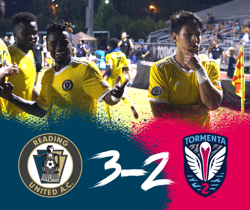 The hosts would jump out to an early lead, striking in the 11th minute. Off a short corner, South Georgia’s Kobe Perez collected the ball deep in the right channel and played a low cross that found defender Daniel Strachan, who knocked the ball into the net to open the scoring for the Southern Conference champions.

Two minutes later, South Georgia doubled their advantage. Off a quick throw-in, J.J. Donnelly played a low cross into the Reading penalty area that found the run of Adrian Billhardt. Billhardt, a forward from the University of South Florida, flicked the ball past United goalkeeper Simon Lefebvre and just inside the far post to push Tormenta 2 out to a 2-0 lead.

United would show the resolve that carried them through the 2019 USL League Two season as they began to rally. The visitors began the second half heaping waves upon waves of pressure on their tiring hosts.

In a move that paid immediate dividends, Reading United Head Coach Alan McCann inserted midfielder Yaya Fane and forward Gilbert Waso in the 68th minute. Waso, playing wide on the left flank, played in a cross that was partially cleared and fell at the feet of United teammate Goncalo Garcia. Reading’s right wing flicked the ball back into the Tormenta 2 penalty area where Fane volleyed the ball into the net to draw United within one goal.

McCann kept tweaking his squad as United looked for the equalizer, subbing Bakary Bagayoko into the match in the 79th minute. Bagayoko would strike for the tying goal five minutes later. Timo Hummrich started the attacking move on the left sideline when he slipped away from his Tormenta 2 markers and played a pass to Maxi Gallizi. Gallizi cut in toward the center channel, slipping a pass to Bagayoko, who danced his way past the South Georgia defense and lashed a ball past a sprawling Tor Saunders for the hard-fought equalizer.

With the game tied at 2-2, two 15 minute overtime periods were on the cards.

In the 120th minute, Reading substitute Corey Burkhardt played a well weighted pass to Bagayoko, who was brought down in the penalty area by Saunders. The referee pointed straight to the penalty spot, opening the door for Reading to complete their amazing comeback and win the match. Veteran Reading United midfielder Felipe Hideki took the spot kick and fired the ball under Saunders and inside the right post to secure the win and send Reading back to the USL League Two Final for the second consecutive season.

Reading United will now travel to Flint, Michigan to face the Flint City Bucks in the championship game set to take place on Saturday, August 3rd. Kickoff for the game is scheduled for 7:30pm.