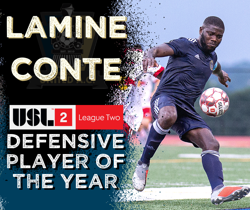 TAMPA, FL (August 16, 2019) –  USL League Two announced on Friday that Reading United defender Lamine Conte was named the league’s Defensive Player of the Year. Conte became the first Reading United player to earn the honor, after captaining the squad to their second straight USL League Two Final. The award is determined by a league-wide vote, with all 72 clubs submitting a vote.

“We have been lucky to have worked with Lamine over the past three summers now, and it has been great to see his progression,” said Reading United head coach, Alan McCann. “He is willing to grow and learn every day, which is a huge reason why he is able to consistently produce top performances for Reading United and at the University of Louisville.”

Conte slid into the team captain role this past summer as part of his third season in Blue and Gold, quarterbacking a defense that recorded eight shutouts in 14 league games. The Union Academy alum saw time in 12 games this past season, racking up 1090 minutes on the Reading backline. Over his three seasons, the University of Louisville defender has played over 3000 minutes of soccer as Reading’s primary option at center back, holding opponents to less than one goal per game on average.

“Having seen him be very comfortable in MLS and USL training environments, we’re excited to see what his career has in store for him during the college season and after,” McCann added.

Conte is the first Reading United player to claim a postseason award since 2017, when Penn State midfielder Aaron Molloy took home Young Player of the Year honors. The Louisville Cardinal defender follows in the footsteps of 2016 MLS Defender of the Year Matt Hedges, who was nominated as a finalist for the same honors in the PDL in 2010.

"Lamine is a coach’s dream. The textbook definition of a captain," said Reading United team administrator Chase Rusden. "High soccer IQ, physical, aggressive, dominant in the air. More technical than your average center back. Great communicator. Lamine is a true leader for his teammates on and off the field. His work ethic is second to none and he was a constant source of inspiration and motivation for his teammates."