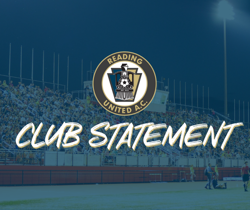 Due to Reading United A.C. being a 2019 USL League Two National Championship finalist, we were offered a position in the 2020 U.S. Open Cup, which extends our amateur record for U.S. Open Cup qualification. However, due to the revised schedule presented by U.S. Soccer last week we will be declining our invitation to participate as a USL League Two representative.

Reading United A.C. is a successful amateur soccer club based in Reading, Pennsylvania that competes in the United Soccer League’s (USL) League Two. USL League Two (formerly known as the Premier Development League), is the proven pre-professional developmental leader in North American soccer. It features over 80 franchises in four conferences throughout the United States and Canada, including 18 clubs that are owned and operated by a professional club, or that hold a partnership with a professional club. USL League Two is a highly regarded stepping- stone for top professionals now playing throughout the world, with more than 80 percent of all selections in the MLS SuperDraft since 2010 having USL League Two experience, including 66 selections in the 2018 MLS SuperDraft.

Reading United A.C. lauds U.S. Soccer’s efforts to expand the opportunity for more teams and for allowing rounds to take place at least two weeks apart for the 2020 U.S. Open Cup. This will assist lower division organizations with logistics and planning for cup play. Reading United A.C. has enjoyed our experiences in the U.S. Open Cup, giving our players exposure and playing experience against some of the top
professional clubs in the United States. We are very proud of our U.S. soccer amateur record of 12 straight years qualifying for the U.S. Open
Cup.

Unfortunately, the revised schedule is nothing short of damning to a large population of the US Soccer market, particularly the U20-U23 player pool. Per NCAA data there are over 25,000 student athletes participating in NCAA soccer. Statistically this player age group is the strongest athlete player pool available and who have shown the greatest success in the modern history of the US Open Cup. While the path to a professional soccer career is changing in the United States, the data shows that the majority of players (over 80%) who have been drafted, or signed, by a Major League Soccer, USL Championship, or USL League One team have played for teams in USL League Two!

This abhorrent scheduling decision forces the top USL League Two and NPSL teams, who afford an Open Cup playing opportunity to NCAA
and U23 players in the USA, to completely modify how they structure a team, or worse, forces them to relinquish their deserved spot to a lower ranked team.

The lack of consideration for such a large player pool is astonishing. We are very concerned this is another example of the public perception of the “tone deafness” that exists within US Soccer. We truly do not understand why US Soccer would essentially eliminate the playing opportunity for what is truly the best soccer player pool, outside of the professional ranks, in the United States.

Reading United feels that the start of the tournament in May (vs March 24-25 as advertised) and end in October or November would have been the best option to accommodate the many types of soccer players, and teams, throughout the United States. As an example, the most famous national cup in the world (English FA Cup Final) finishes after the end of the professional league season.

Historically, the success of those amateur soccer teams who have enjoyed the most success in “David vs. Goliath” situations of the U.S. Open Cup have been those teams who are comprised of the top college talent. US Soccer’s scheduling decision ELIMINATES this opportunity for ANY NCAA soccer athlete.

We are sorry that U.S. Soccer does not feel the U23 player pool deserves the opportunity to participate in the 2020 U.S. Open Cup. Given our history, and success within the U.S. Open Cup, this is not an easy decision for us, but we feel U.S. Soccer is showing utter disregard for clubs like Reading United A.C., and leagues like USL League Two, who still provide playing opportunity for U23 players. Should U.S. Soccer decide the advertised schedule will stand, and they choose to eliminate NCAA soccer players (and potentially some of the top U23 clubs in the country) from the U.S. Open Cup, then Reading United A.C. has no choice but to decline our deserved qualification for the 2020 US Open Cup.