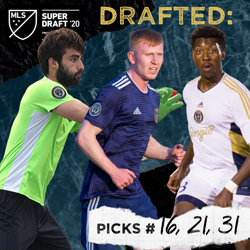 READING, PA (January 9, 2020) –  Reading United can add a few more names to its already extensive list of alumni that have been selected in the Major League Soccer SuperDraft. Aaron Molloy and Simon Lefebvre were chosen in the first round, while Joey DeZart heard his name called in the second round.

With the three selections, Reading United now touts 66 alumni who have been selected in the draft, held annually by the top professional soccer league in North America.

Aaron Molloy, who played in parts of four seasons with Reading United, was chosen as the 16th overall pick by the Portland Timbers. Molloy began playing with Reading United back in 2016 prior to their run to the Eastern Conference Final, and racked up multiple awards within USL League Two. Molloy was named USL League Two Young Player of the Year in 2017, and followed it up with a second appearance on the All-League Team in 2018.

Molloy played 29 games in Reading, tallying 13 goals and five assists. The beloved Irishman made a name for himself not only in Reading, but also at Penn State University, where he earned First-Team All-Big Ten honors in the 2019 campaign.

The 21st pick in the MLS SuperDraft went to D.C. United where they drafted Simon Lefebvre. Lefebvre played an integral part in Reading United’s playoff run this past season. Reading United went with the six-foot-nine French-born as their primary goalkeeper for the 2019 postseason where he finished with a .714 save percentage. Lefebvre also competed at the collegiate level with Temple University where he ended with a .733 save percentage and seven clean slates.

Orlando City selected Joey DeZart with the 31st pick in the SuperDraft. The Philadelphia Union Academy and YSC Academy grad played with Reading United for some time. The New Jersey local came up through the Union Academy competed with Reading United in 2017 and 2018, seeing time in one game. DeZart then moved up to the NCAA where he played with Wake Forest University. The midfielder started in 53 games over his collegiate career and accumulated two goals and four assists.