Charity event will be held on Sunday, October 11th to raise money for Roland family 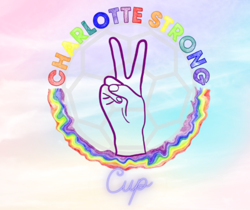 READING, PA (October 5, 2020) –  Reading United A.C., Wilson Junior Soccer Club, and Wilson Over 40’s Men’s Team are teaming up to present the Charlotte Strong Cup. The charity soccer round-robin will raise funds to help Charlotte Roland and her family with their financial strain, as Charlotte battles a medulloblastoma brain tumor. The event will take place on Sunday, October 11th at Wilson High School, with the first kickoff tentatively scheduled for 2pm.

There will be a minimum of six teams participating in the event, which is an annual set of soccer friendlies intended to raise money for families battling childhood illness in the Greater Berks County region. Normally, the event would follow the Wilson Junior Soccer Club’s Fall Classic, which was cancelled this year due to COVID-19 concerns. Coaches from youth teams in the Fall Classic, Reading United Fun League, and other soccer fans in the area have generously donated and played in this event in previous years. Past year’s games have helped families in the Conrad Weiser, Tulpehocken, and Wilson areas.

If anyone would like to volunteer, play, or contribute to the cause, please reach out to Jeff Blankenbiller, Reading United’s Director of Operations at jeffb@readingunitedac.com. Reading United will be adding a donation option on their team store, with all proceeds going directly to the family.

Charlotte is a beautiful, strong, smart 7-year-old who loves God, loves her family, and loves her life of school, friends, writing songs, making jewelry, dancing, swimming, going to the beach, and playing with her sister Alice (4) & brother Matthew (2).

On June 26, 2020, Charlotte was rushed to Saint Joseph’s emergency room in Reading for a brain bleed. She was taken immediately by helicopter to the Penn State Children’s Hospital in Hershey, where she had emergency brain surgery to alleviate the swelling and remove the bleed. On July 10th, it was learned that the cause of this brain bleed was a level 4 medulloblastoma brain tumor. After an overnight transfer to CHOP on July 14, with hopes of beginning proton radiation, it was learned that the tumor may be 3.9cm, so plans needed to change. A second brain surgery was scheduled three weeks later to remove as much of the tumor as possible. Charlotte underwent her second brain surgery on July 20, 2020 to remove the tumor and the doctor was satisfied with the tumor resection. Charlotte recently began 30 days of radiation, which unfortunately was interrupted by an emergency brain surgery to place a shunt to relieve some swelling. She is now back on track with her first round of radiation at CHOP, and will relocate to St. Jude’s in Memphis, TN in late October (with her mom & grandma) for four months of clinical trial chemotherapy and radiation.

Charlotte's mom, Barbara, has been by her side since June 26, and her loving dad, Andy, has been by her side, while also traveling back and forth to Reading to be with Alice & Matthew. Andy continues to work as a self-employed realtor, property owner and landlord. They have an incredible journey ahead of them to heal Charlotte, while also caring for Alice and Matthew, and maintaining Andy's business.