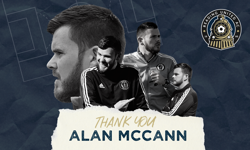 READING, PA (December 3, 2020) –  Reading United A.C. announced today that Alan McCann has decided to step down from his role as the club’s head coach.

“It has been an honor to be a part of the club for so many years,” said McCann. “I have loved every minute of my time, both as an assistant and as a head coach. I want to thank everyone at the club, the players, and fans that have been part of the journey. It is time to move onto the next chapter of my career and hopefully I will see you all again soon.”

McCann departs the club as arguably the most successful coach in Reading United history, despite only two seasons at the helm. The Irish head coach guided United to consecutive USL League Two Final appearances in 2018 and 2019, finishing undefeated in the 2018 regular season. For his efforts, McCann was named USL League Two Coach of the Year in back-to-back seasons.

“We thank Alan for his commitment not only to the organization but more importantly to the players,” said club president, Troy Snyder. “Back to back USL League Two Final appearances were memorable for everyone. We wish Alan continued success.”

McCann’s 22 regular season victories are tied for second in the club’s history as an amateur-side, ending with a combined 22-1-5 record. Including playoffs, Reading has only lost three times until McCann’s watch, going 28-3-5 under the gaffer. McCann’s 2.53 points per game average and six playoff victories sit atop the United record book. Three players were named All-USL League Two under McCann’s tutelage, while six were tapped with All-Eastern Conference honors.

Vice President Art Auchenbach reflected, “We are indebted to Alan for all of the successes he has brought to our club. While this is a sad day for the Reading United family, it creates an opportunity for Alan, as well as our team. With all of the craziness of 2020, the ownership of Reading United is ready for a new start in 2021. We remain optimistic that our club will continue our success while re-focusing our efforts on bringing opportunities for our local players, staff, and fans. We wish Alan best of luck in his future endeavors and we have no doubt that he will become yet another great professional coach who has called Reading his summer home.”

McCann originally came to Reading as a player during the 2012 season, before joining Stephen Hogan’s staff as an assistant coach in 2016. McCann was promoted to the head role in 2018, becoming United’s fifth head coach since the club joined the PDL/USL League Two in 2004.

Assistant Coach Shane Keely will also be departing the club.