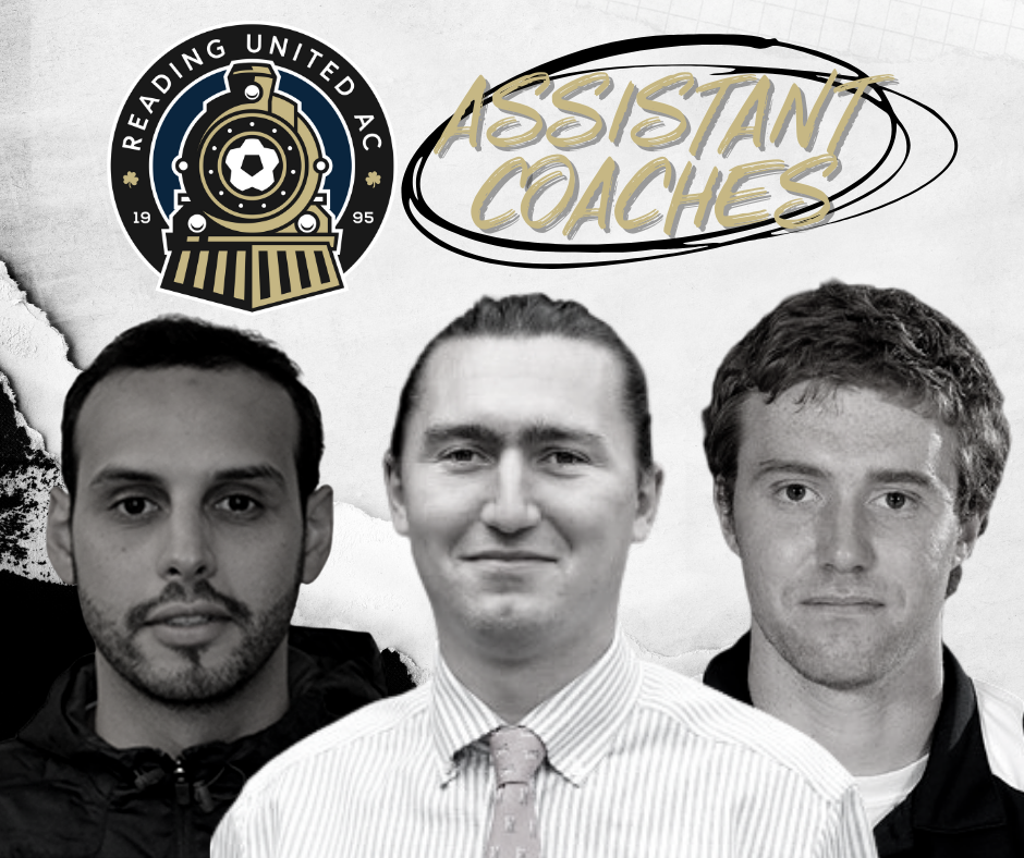 “We are really excited to have Atif, Richard, and Wyatt join the staff at Reading United,” said head coach Casey Moore. “All three of them are great people and excellent leaders. We are all excited to work together this summer.”

Atif Molki is back for his second season with Reading, previously serving briefly as a volunteer assistant coach in 2018. Molki has previously spent time on Casey Moore’s staff before, serving as an assistant coach at Alvernia University under Moore from October 2018 through January 2020. His most recent position has found him at Barcelona FC Residential Academy, where he serves as the head coach for the U19 Pre-Academy and UPSL squads. Molki has also had stops with the Olympic Development Program (ODP), Rage Soccer Club (under former Reading Rage coach Eric Puls), and Philadelphia Soccer Club. He is a former member of the Morroccan U-20 National Team and recently received his USSF A Senior License.

“Atif has a ton of experience within the game at all levels, added Moore. “We have worked together in the past, we have a similar perspective on the game and a strong relationship together.  Atif’s simple and direct approach to communication and coaching will be very beneficial for the players. His ties to Barcelona Academy will help with future player recruitment as well.”

Richard Kessler returns to his roots in the Reading-area, pulling double-duty as an assistant coach as well as goalkeeping coach. Kessler was a four-year standout at Alvernia University, collecting All-PAC and All-Freedom Conference First Team honors. The Reading High School graduate left college as Alvernia’s all-time leader in saves, shutouts, and goals against average  After Alvernia, he saw time outdoors in the NPSL with FC Reading Revolution and indoors with Philadelphia Kixx and Baltimore Blast of the MASL. Currently, he is an assistant coach with Penn State Abington’s men’s team, boys soccer head coach at Plymouth Whitemarsh High School, and a coach at FC DELCO. Richard holds a USSF D License.

Moore included, “Richard will be assisting in all facets of coaching but his primary role will be to develop the goalkeepers.  Richard was one of the best goalkeepers to ever play at Reading High School and Alvernia University.  Richard is an intelligent coach with strong communication skills.  He will challenge our goalkeepers to improve their technical quality, footwork, and positioning. Richard is involved in club, high school, and college soccer so he will also play an important role in future player recruitment.”

Wyatt Fabian, a Sinking Spring native, will serve in a video analyst role with the club. Fabian was a standout at Franklin & Marshall College, serving as a two-year captain, a three-time All-Centennial Conference selection, and a third-team All-American in 2016. After graduation, Fabian taught for one year in Connecticut before returning to Coach Dan Wagner’s staff at F&M in 2019. He currently serves as the head coach of The Hill School’s boys soccer program, returning to his high school alma mater. Fabian grew up attending Reading United games, and looks forward to adding his experience to the coaching staff.

“Wyatt recently finished up a stellar playing career at Franklin & Marshall and immediately made an impact as a coach within their program,” finished Moore. “He is a cerebral person with a breadth of knowledge.  He has great ideas and the ability to get his messages across clearly and concisely.  Wyatt’s primary role will be video analysis.  He will be tasked with breaking down film for scouting purposes as well as using our own film to improve individual and team performance within the club.  Wyatt’s recent appointment as the head coach at The Hill School will be important for our future recruiting needs.”

“We’re excited for the ‘team behind the team’ that Coach Moore has put together, said Art Auchenbach, Reading United Vice President. “All three have experience with Reading or being from the area, have an understanding of what it takes to be part of Reading United.  We look forward to seeing these men be the next talented group of coaches to lead Reading United.”