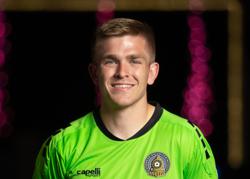 Reading United has a bevy of local talent this season. The roster includes six players from Berks County. In fact, the entire 32-man roster only includes eight players that don’t call the Mid-Atlantic region home. Two are from Germany. Two are from the United Kingdom. There’s one each from South Africa, Switzerland, Canada. There is only one American player on the roster who doesn’t come from Pennsylvania, New Jersey or Maryland. That’s goalkeeper Carson Williams. And, if you can believe it, he calls Plano, Texas home.

“I’m pretty far from home,” Williams said after United’s 2-1 loss to NoVa FC Friday night at Don Thomas Stadium. “I like this area. With the rep Reading has had the past few years, I thought the best thing to do was stay around here.”

Williams attends Villanova, where he has been the starting keeper the past three seasons after he redshirted his freshman year. In Texas, only four schools offer men’s soccer as a Division I sport: Southern Methodist University (SMU), University of the Incarnate Word, Houston Baptist University and University of Texas Rio Grande Valley. Universities are required to have as many scholarships for female athletes as male athletes under Title IX, which means schools that usually have entrenched football programs sometimes choose not to back men’s soccer teams. That leaves schools such as Texas, Baylor, Texas Tech, Texas A&M, TCU and Houston without men’s soccer teams.

“There’s not many Division I teams in Texas,” Williams said. “It’s only like SMU. I got offers early on from Wake Forest, Xavier, Portland. It was mostly east and west coast schools. None from Texas. The coaches (at Villanova) reached out to me after one of the showcases for academy. Once I visited, I liked the guys, coaches and culture there.”

Things have been working out well for Williams in Pennsylvania. He started all 17 games as a freshman in 2018, posted four shutouts and twice earned Big East Freshman of the Week. He had the nation’s top save percentage in 2019 and posted nine shutouts, the most in a single season in program history. He started nine of the 10 games the Wildcats played in a pandemic-affected 2020 season.

Williams has played all 270 minutes in net and made 12 saves in United’s three games this season. His immediate goals are to help turn the season around for Reading. “We all want to win,” he said. “We kind of showed a lack of heart there (in the loss to NoVa FC). That’s kind of how the season has started. I think this can be a good turning point for us to show more spirit moving forward and make a push for the playoffs.”

Another Wildcat who played for United, Zach Zandi, now suits up professionally for the Colorado Springs Switchbacks in USL Championship. He led Villanova to its first NCAA Tournament appearance in 2016. Williams hopes to do some of those same things moving forward.

“Take it one by one,” Williams said of his goals for his senior season at Villanova. “Win enough games to get to the Big East Tournament. Win that. Get to the NCAA Tournament. And after that, try to go pro whether that’s USL or all the way up to the MLS.”