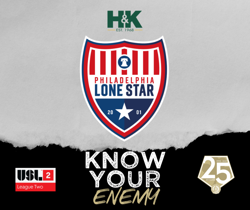 Reading United will travel to the South Philadelphia Super Site on Saturday night to compete against Philadelphia Lone Star FC. Lone Star is currently in 4th place in the Eastern Conference Mid-Atlantic Division, two places above Reading in the current division table. Lone Star’s record is 2-4-0, and both of their victories were over Lehigh Valley United.

Last Time Out: Like Reading, Philadelphia’s start to the season consisted of posting two consecutive away losses. After earning a win against Lehigh Valley United, Lone Star dropped their next two matches. Philadelphia’s most recent match consisted of a 2-1 away victory against Lehigh Valley on June 2. After a scoreless first half, former Reading United forward Daniel Bloyou netted two goals in the 50th and 75th minutes to seal a win for Lone Star as Lehigh Valley failed to mount a comeback.

Players to Watch: In addition to his brace in Wednesday’s match, Bloyou now leads Philadelphia in shots with seven total and is tied with midfielder Patrick Singbah for being the club’s leader in goals with two. Singbah is a large part of Lone Star’s offensive production in the midfield and is tied with forward Anthony Allison for second most in total shots for the season with five.

Last Meeting: The last meeting between Reading and Philadelphia was on May 28, 2021 at Don Thomas Stadium. A rainy and unseasonably cool night hindered both teams’ offenses as neither team recorded a shot until the 33rd minute. Lyam MacKinnon had a stellar night of play for United, taking seven shots and scoring the game winning goal in the 60th minute. The United defense limited Lone Star’s chances, as Reading would go on to outshoot Philadelphia 17-6 and claim their first win of the season 1-0.