A 0-0 draw had more going for it than you might think. 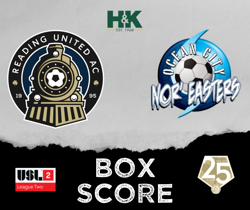 In a rather uneventful 0-0 draw against the Ocean City Nor’easters last night, Reading can take solace in grabbing a point on the road against very difficult opposition. The draw puts an end to Ocean City’s perfect 3-0 start to the season under former Reading United coach Alan McCann. Although it was a scoreless affair, it marks the second game in a row that Reading United were able to secure a shutout. It’s a significant marker of progress for a team that previously struggled defensively so far this season, and the level of opposition makes the accolade much sweeter. The box score doesn’t stand out in too many ways but there’s still plenty of talking points to draw from the game for Casey Moore and his coaching staff.

Maintain Discipline Out of Possession

Against an impressive Nor’easters side under Alan McCann, Reading United knew the tough task at hand going into the away leg. Ocean City dominated the proceedings of the match, outshooting the visitors 6-1, forcing Carson Williams into 2 saves en route to his first career shutout with the team. It was a largely out-of-possession defensive performance from United but the Reading coaching staff should see no problem in that and continue bolstering their quality in discipline toward defensive transitioning. How you perform without the ball dictates how well you can allow yourself to create meaningful chances in possession, and the defensive discipline on show against Ocean City is great progress to build on for next game.

Wednesday’s 0-0 draw now puts Reading United at just 3 goals for (GF) after 5 matches this season, the lowest total in the Mid-Atlantic division. Defense is the foundation of a team, and with improvement in that area of late, the attacking third must be next to climb back up the standings. Against teams that control possession, Reading United might have to look toward utilizing deep outlet passes using the wide areas to get up the pitch. This can clear out the congested middle section of the pitch and allow for the forwards to make runs in behind to further stretch the opposition.

A Bigger Result Than You Think

Against an accomplished head coach that manages a hugely talented Ocean City side previously enjoying a perfect record heading into yesterday’s match, a scoreless draw is a much better result that what initially meets the eye. Taking into consideration of being on the road against a top team in the conference, in conjunction with previous struggles defensively against a team with 12 goals in the division, to come away with a point is a sign of significant progress. Each third of the pitch relies on the one before it to dictate its potential for success. In order to get on the scoresheet and make a game competitive, the defensive third must be the foundation while the middle third fortifies that foundation with playmaking as well. With defending getting sorted out as of late, especially against top opposition, it’s only a matter of time until the attacking third is given more of a chance to shine.