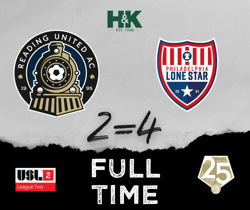 PHILADELPHIA, PA (June 5, 2021) –  Despite putting up multiple goals for the first time all season, it wasn’t enough for Reading United to turn the tide of an onslaught of Philadelphia pressure, as three goals spanning just seven minutes turned a one goal lead into a two goal deficit in Reading’s 4-2 loss on the road. Lone Star goals in the 65th, 66th, and 72nd minutes ultimately doomed Reading’s chances at extending their unbeaten streak to three. With the loss, Reading fell to 1-4-1 on the season, while Philadelphia improved to 3-4-0.

Reading got off to a hot start, as Wyomissing-native Seth Kuhn took a free kick from just outside the right corner of the box, and bounced it past an outstretched keeper to the far post for an early 1-0 lead.

Philly answered back with a 38th minute header from Aaron Keita, who slipped in by the far post for an uncontested nod on frame to knot things at 1-1 entering the half.

United retook the lead on a crushing counterattack in the 54th minute, spearheaded by Andrea DiSomma’s first in a Reading kit. A turnover about 40 yards from Reading’s goal was swiftly taken the other direction, and DiSomma handled most of the heavy lifting down the left flank and punching it home for a 2-1 edge.

But Lone Star answered, and answered in abundance. A failed clearance deep in Reading territory gave Philadelphia new life during a long streak of possession, and Zonchar Dennis made no mistake with a bender that stunned Jonas Dieseler in net for a 2-2 stalemate. Just a minute later, Lone Star struck again as a lacing cross from the right flank was nodded backwards in the box, nodded towards the far post, then scissor kicked home for a 3-2 lead. Just six minutes later, Philadelphia punched in their third unanswered, this time crossing in from the left side, and a turnaround shot from just inside the 18 that left Dieseler flat-footed for the 4-2 final.

These two teams will meet up again in Reading on July 2nd at Don Thomas Stadium for a third and final time.

Reading will have a full week to prepare for their next game - a Saturday, June 12th matchup against division-leading West Chester United at Don Thomas Stadium. The night will be United’s annual Kick Against Cancer night, where game-worn jerseys will be raffled off in a silent auction for charity postgame. Tickets can be purchased at readingunitedac.com/tickets.