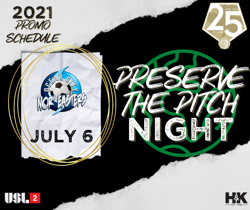 READING, PA (July 6, 2021) –  At 7:00pm this evening, Reading United return to ‘home soil’ to face off against the Ocean City Nor’easters in their third of four consecutive home matches to close out the USL League 2 season.

Instead of Exeter’s Don Thomas Stadium, tonight’s match will be played at the nearby Berks Catholic High School, where Reading United will look to build from their impressive 4-1 rout over Philly Lone Star last Friday. It will be Preserve The Pitch Night at the stadium, where all things reduce/reuse/recycle will be celebrated with Barrio Allegria, Opportunity House, and Hawk Mountain on hand for fans.

In the reverse fixture against Ocean City on June 2nd, Reading battled out to a well-earned point on the road in a 0-0 draw against a division heavyweight, and head into this match in good form ready to make another statement.

Last time out for United against Philadelphia Lone Star, Andrea DiSomma stole the show with a hat-trick performance, before Pedro Bottene tallied a late goal to capitalize on what was Reading’s best performance of the season so far in a 4-1 victory. The hat-trick was Reading’s first since the 2019 season when Felipe HIdeki tallied three against

Coming off a 5-0 win against Real Central NJ, the Ocean City Nor’easters are also in a rich vein of form and can clinch a playoff spot with a win against Reading this evening. For a chance to clinch the top spot in the Mid Atlantic Division, Ocean City will need to take home all 3 points, and will certainly look to do so after dropping 2 points on their home leg earlier in the season.

With a game in hand over Philadelphia Lone Star, a win against Ocean City can put Reading United in pole position to end the season on a good note at the 4th spot in the division standings.