Season finale bookends season with another match against local rivals 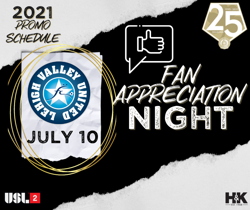 READING, PA (July 9, 2021) –  Reading United will end their season the same way it began - against Lehigh Valley United (LVU). Kickoff is scheduled for 7:00pm at Don Thomas Stadium. As the final game of the USL League Two season, it will be Fan Appreciation Night where we will be recognizing our fans for their support throughout the season. Multiple non-profit organizations will be in attendance, including Animal Rescue League, Humane Society of Berks County, and United Way of Berks County.

The two teams last met in the opening match of the season, as LVU shell shocked the visiting United in a 5-1 drubbing. LVU netted four goals in a 16 minute window in the first half of play as Colby Raymond and Perry Kingson each scored a brace for the home club.

Reading is coming off of a 5-2 loss against former Reading United head coach Alan McCann and the Ocean City Nor’easters. Ocean City dominated the first half of the match securing two goals followed up by three additional goals in the second half. Although it was not the outcome Reading wanted it was still a memorable night for some. 18-year-old midfielder Zeke Zambrano recorded his first career assist and point with Reading United, while T-Ben Donnie recorded his first USL League Two goal after climbing up from the club’s reserve squad. Ocean City clinched a playoff berth with the victory.

United’s offense has come alive as of late, scoring six goals in their last two games - as many as they had scored in their last seven. Andrea DiSomma was hat-trick hero against Philadelphia Lone Star, while Jake Gosselin has been a steady presence with a goal and assist during the stretch.

Tickets can be purchased in advance for $5 at readingunitedac.com/tickets. Tickets are also available at the gate for $10. Live tweeting of the game will be at twitter.com/readingunited and a livestream will be uploaded after the game at readingunited.com/live.