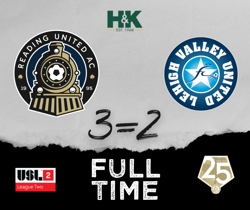 READING, PA (July 10, 2021) –  Reading United rallied past visiting Lehigh Valley United to score a 3-2 victory in their USL League Two season finale at Exeter Township High School’s Don Thomas Stadium. The hosts rocketed to the lead when they hit the back of the net three times in eight minutes with goals from Ryan Becher, Jake Gosselin and Andrea DiSomma to secure three points.

The game did not kickoff the way Reading intended. The hosts conceded an early penalty kick in the 7th minute. LVU forward Ryan Kuster was able to score from the spot as he sent Reading goalkeeper Lukas Burns the wrong way to give the visitors an early advantage.

Reading United have surged in the second half of their final stretch of games and that trend held true in the season finale. In the 68th minute, Reading’s Ryan Becher was able to find the back of the net with a header off a sumptuous cross delivered by midfielder Zeke Zambrano. The goal was Becher’s third of the season and Zambrano’s second assist in as many games.

Just two minutes later, Millersville product Jake Gosselin was able to power the ball past Lehigh Valley’s Flannan Riley to push Reading to a 2-1 lead. Gosselin found the ball at his feet coming from a through ball served by defender Josh Dubost from his defensive half of the field. It was Gosselin’s third goal of the season.

Gosselin added to his stat line as he rushed down the right side of the field, leaving two defenders in his wake. His pinpoint through ball was on target to Reading’s leading goal scorer Andrea DiSomma, who was able to beat Riley for Reading’s third goal in eight minutes and push the lead to 3-1 in the 76th minute. The goal was DiSomma’s sixth of the campaign.

Lehigh Valley was able to pull a goal back in the 93rd minute as they were awarded a penalty kick. Nick Allen converted the penalty, which would have no effect on the final outcome of the game as Reading would go on to a 3-2 victory, avenging a lopsided 5-1 road loss at Lehigh Valley.

The win was Reading’s fourth of the 2021 season and the eleventh win all-time over Lehigh Valley United. Reading wrap up a challenging season in fifth place in the USL League Two Mid-Atlantic Division, one spot ahead of Lehigh Valley.

Reading United fans are encouraged to follow club news throughout the offseason at www.readingunitedac.com and the club’s social media platforms.