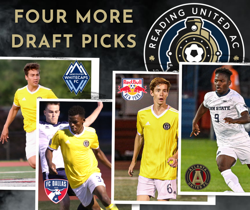 READING, PA (January 11, 2022) –  Four Reading United alumni heard their names called in the 2022 Major League Soccer (MLS) SuperDraft on Tuesday afternoon - Simon Becher, Tsiki Ntsabeleng, Seth Kuhn, and Daniel Bloyou. Reading has now had 75 alumni selected in the MLS SuperDraft, and now 150 players who have gone on to play professionally, be drafted, or have an international cap.

Wyomissing, Pa. native and Penn State graduate Seth Kuhn became the first Berks County native to be drafted since Antietam graduate Corey Hertzog in 2011 when the New York Red Bulls made him the 73rd overall pick in the draft. Hertzog declared for the SuperDraft after his junior year as a Nittany Lion, and was also drafted by the Red Bulls, albeit with the 13th selection.

Simon Becher was selected 16th overall selection by the Vancouver Whitecaps, the first United alum drafted by the Canadian side. Becher notched seven goals in just ten games for Reading United in 2019, helping lead Reading to a 13-1-3 record and an eventual trip to the USL League Two final against the Flint City Bucks. The Saint Louis forward ranked second in the NCAA in scoring with 38 points, notching A-10 Offensive Player of the Year honors in addition to his United Soccer Coaches All-American First Team accolades.

Tsiki Nstabeleng was picked up by FC Dallas with the 28th overall pick, becoming the third United player picked up by the team. Nstabeleng saw time in five games for the 2019 squad notching one assist and four shots before an injury cut his season short. The South African winger was named All-Pac 12 First Team, notching five goals and eight assists for Oregon State.

Becher and Ntsabeleng became the 27th and 28th United alumni to be drafted in the first round of the SuperDraft.

Kuhn played in 13 games across two seasons for Reading, most recently in the 2021 season where he scored a goal and an assist in 360 minutes of play. His output matched a nine-game season in 2019 for Reading, including an eventual game-winner against Lehigh Valley United in the team’s road opener. Kuhn was named to the United Soccer Coaches All-North Region Second Team, finishing with five goals and eight assists for the Nittany Lions.

Daniel Bloyou rounded out Reading’s selections, waiting only two selections behind Kuhn with the 75th pick by Atlanta United. Bloyou played in limited minutes during the 2019 season, playing 84 minutes across three games. The projectable forward scored four goals and seven assists for Penn State this past season, becoming the first Reading alum to be drafted by Atlanta.