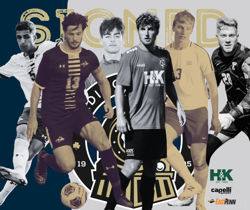 Becher returns to Reading after spending the summer of 2021 in the Pretzel City, seeing time in eight games and recording just under 300 minutes of playing time. The UMBC forward played in a career-high 18 contests for the Retrievers this fall, earning four starts while recording a pair of goals and three assists.

Kuster joins Reading for his first season after starring at Alvernia for four seasons. A D3Soccer.com and United Soccer Coaches All-America selection this past season, the Lancaster, Pa.-native led the MAC Commonwealth with 2.05 shots on goal a game, while anchoring a defense that allowed just a goal per game on average.

Bhogal is a Governor Mifflin grad and former Reading United Reserves player looking to make an impact at the USL League Two level this season. Ammit comes with USL2 experience, having played in nine games for West Chester United last season. The defender started all 20 appearances for the Golden Wolves this past year while playing under head coach Casey Moore.

Hershey comes in as a high scoring forward at the DII level, scoring 13 goals while adding nine assists in 18 starts for Lock Haven this past season. The Lancaster, Pa.-native was named United Soccer Coaches Second Team All-Region after netting PSAC Eastern Division Rookie of the Year, All-Region, and All-Conference First Team honors after his freshman season.

Sivri joins the club after spending time at PA Classics U19. The Lancaster, Pa. resident looks to make a mark on Reading United this year at the center midfield position.

Gawronski comes in after his redshirt freshman year in net at Temple. The Limerick, Pa.-native started four games before an injury ended his season, but received national acclaim for making overtime penalty kick saves in back-to-back matches during 0-0 draws against No. 10 Seton Hall and Rutgers. He received Second Team All-AAC and All-Rookie honors following his freshman year with the Owls.

Reading United opens its 2022 season on the road on Saturday, May 14th against Lehigh Valley United at Moravian College. United will play its first home game a week later, facing Philadelphia Lone Star on May 21st beginning at 7:00 p.m. at Alvernia University. Season and game day tickets are available for purchase at readingunitedac.com.