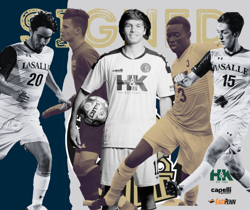 A grad student at La Salle, Faye spent the majority of his collegiate career at Florida International, racking up 30 appearances for the Panthers. He found a niche as a super sub during the 2021 season, scoring three goals while adding four assists in 483 minutes. The Senegalese midfielder scored twice against Jacksonville in a 6-0 win, while scoring a goal with an assist against South Carolina in a 4-1 victory.

Moore arrived at La Salle this past year as a transfer from UMBC, who he joined after a standout youth career in New Jersey. The goalkeeper was selected First Team South Region, All-South Jersey, and All-State in his junior and senior years, including a South Jersey Goalkeeper of the Year nod in 2018. He looks to figure into the goalkeeping mix for Reading this upcoming season.

“Ike” Hollinger returns to Reading for another run as an attacking option up top. The senior forward from Mountville, Pa. patrolled the field for nearly 700 minutes last summer, accumulating 13 shots. Hollinger appeared in 14 games for the Explorers, scoring once while adding a pair of assists.

Puchol will add depth along the United backline after appearing in 14 games and starting a dozen for the Explorers this past season. The Switzerland-born defender has been a mainstay in La Salle’s starting eleven, picked to start in 34 of his 38 games played, registering two assists.

Sedin made an immediate impact for the Explorers since arriving from Sweden, starting 31 of his 41 appearances in Philadelphia. The midfielder appeared in 13 games this past season, starting nine of them while adding two assists. He’s added three goals and another assist in his previous two years for La Salle.

Reading United opens its 2022 season on the road on Saturday, May 14th against Lehigh Valley United at Moravian College. United will play its first home game a week later, facing Philadelphia Lone Star on May 21st beginning at 7:00 p.m. at Alvernia University. Season and game day tickets are available for purchase at readingunitedac.com.