United Seek To Bounce Back Against Lone Star

Reading travels to Philadelphia for second meeting against divisional foe 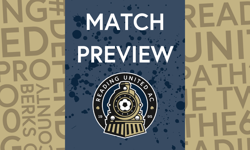 READING, PA (June 11, 2022) – Reading United travels to Philadelphia on Saturday evening to face a Lone Star squad that is struggling to keep pace with a talented Mid Atlantic Division. A 7:00 p.m. kickoff at the South Philadelphia Super Site awaits the two clubs, who tied their initial meeting in Reading.

The two clubs met back on May 21 in the Pretzel City, finishing in a 2-2 deadlock after 90 minutes. Philadelphia secured a 1-0 lead going into the half, courtesy of a deflected free kick that wrongfooted the Reading keeper in stoppage time. Reading bounced back with a pair of goals from Marten Imping - the last coming in the 84th minute for a 2-1 lead. Lone Star answered back just a minute later to steal a point on the road.

Lone Star have picked up four points in their last four games since the clubs’ previous meeting, by virtue of a 3-1 win over Lehigh Valley United and a 1-1 draw against defending division champion West Chester United. It marks the first home game for the club since the season opener on May 14, when Philadelphia was trounced by Real Central New Jersey 5-1. In fact, two of the club’s three losses have come to the second year-side RCNJ, being outscored 8-2 by the Jersey club. Lone Star are led by Patrick Singbah, who paces the club with a pair of both goals and assists.

Reading enters with a full week of training under its belts, following the club’s first loss of the season - a 2-0 faltering to the hands of division-leading Ocean City. A pair of first half goals buoyed the Nor’easter effort, sending them to the top of the Mid Atlantic table with a game in hand. United enter 1-0-2 on the road, securing at least a point in the tightly-contested division - including a 3-1 victory over West Chester on May 18.

United return home following the contest to face Ocean City for the 54th time on Friday, June 17, with a 7:00 p.m. kickoff planned at Alvernia. Game day tickets for all remaining home dates are available for purchase at readingunitedac.com for just $7+fees or for $10 at the gate.