RCNJ vaults past Reading in the standings with the win 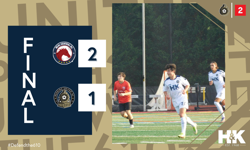 READING, PA (July 9, 2022) – In a battle for third place in USL League Two’s Mid-Atlantic Division, Reading United A.C. (4-4-5) were upended by visiting Real Central New Jersey (5-6-2) by a 2-1 final. Despite being outshot by Reading 15-9, RCNJ never trailed in the match, getting goals from Stephen Duncan and Conlan Paventi. Reading’s lone goal came late in the first half off a penalty dispatched by Alex Hajj.

Real Central New Jersey got on the scoreboard in the game’s 9th minute. After winning a corner kick, Sergio Aguinaga lofted a good ball into the Reading penalty area. Defender Stephen Duncan slipped away from his defender and headed the ball past United goalkeeper Russell Shealy to give the visitors a 1-0 lead.

Despite creating a majority of chances in a back and forth second half, Reading would find themselves trailing again in the 70th minute. Real Central New Jersey launched their attack from the own half with a patient build-up. Midfielder Hale Lombard, spotting the run of forward Conlan Paventi, struck a ball over the top of the Reading defense from the midfield stripe. Paventi collected the ball, shrugged off his defender and finished past Shealy to push RCNJ to a 2-1 lead.

Though pushing hard through the game’s final 20 minutes, Reading could not find an equalizing goal. The win allowed RCNJ to leapfrog United and into third place thanks to a better goal difference.