It's time to help your favorite players get some hardware! 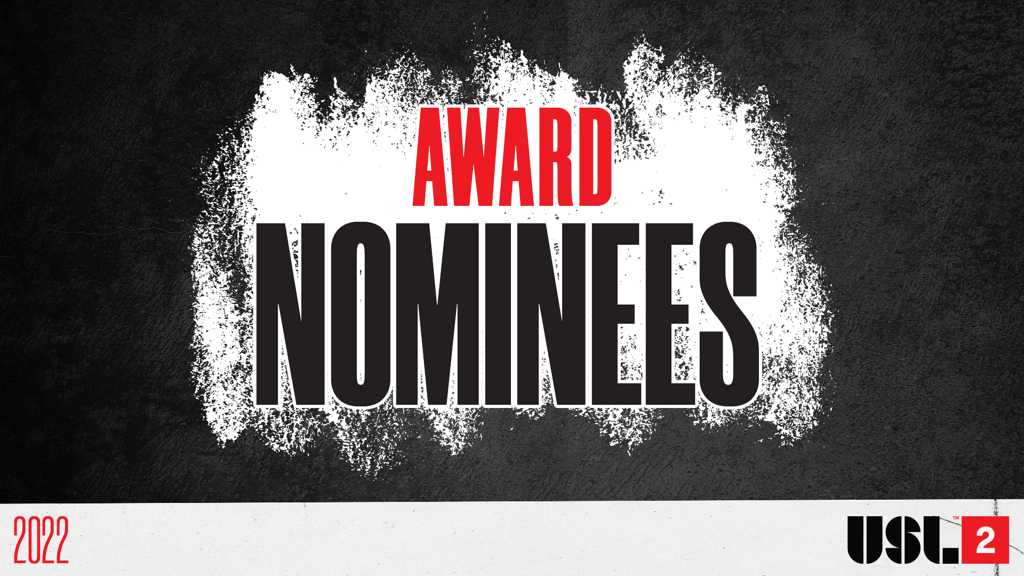 It's been a fantastic season for all our players!

Now, it's time to vote for the very best in League Two this season.

Each of these polls close at 5 p.m. ET on Wednesday, August 3rd, with winners announced ahead of the League Two Final on August 6th.

The nominees were selected by the USL League Two Sporting and Operations departments for their excellent production over the course of the entire season. Now, we turn to you to help select the winners.

The fan vote will account for 33% of the total vote, with single winners determined by the nominee with the most total votes at the end of the voting period. The other two-thirds of the total vote rests with League Two coaches (33%) and the USL League Two Sporting, Operations and Communications departments (33%).

Player of the Year

The very best performers in League Two this year came from all over the pitch. The best scorers, the best shot-stoppers, the best passers, all left it on the field for their team.

It's time to select your League Two Player of the Year. Here are the nominees:

F Ethan Stevenson, Brazos Valley Cavalry: Stevenson won the League Two Golden Boot award after scoring in every single regular season match for the Cavalry. Six braces on the year led to an 11-win season and the second seed in the Southern Conference headed into the playoffs. His 19 goals in 13 matches is one of the highest marks in league history.

M Ben Stitz, Christos FC: Stitz won the League Two assist title... and then came second in the Golden Boot race. His 27 goal contributions outpaced everyone in League Two this season. When Stitz got onto the scoresheet, Christos FC went 9-0-0 in the regular season, as he led them to a playoff appearance on the back of his performances.

F Braudilio Rodrigues, Western Mass Pioneers: Pioneers started the year off shaky - until Rodrigues started playing. From his second performance until the second-to-last match, Rodrigues scored 10 goals and Western Mass won 10 straight matches. He was the key piece to one of the best teams in the league all season.

D Benjamin Weimann, NC Fusion U-23: NC Fusion were one of the hardest teams to beat in all of League Two - only West Virginia United did it in a last-minute playoff push. Weimann played all 90 minutes in every Fusion match, helping them keep five clean sheets as part of their 11-1-2 record.

D Samory Powder, Hudson Valley Hammers: The Hammers experienced mixed results this season, but Samory Powder was an attacking phenom from the right back position. Six goals and six assists from a defensive spot in a tough Metropolitan division landed Powder on the June Team of the Month, and onto this list of nominees.

D Lesia Thetsane, Ballard FC: Thetsane was the Day 1 captain for Ballard FC, operating out of the left-back position. The Lesotho national team member's ball-winning and ball progressing prowess were essential for Ballard as they chased one of the Northwest Division playoff spots.

GK Felix Schäfer, Ocean City Nor'easters: The 2022 Golden Glove winner, Schäfer was a force in between the sticks. He allowed under 0.6 goals per 90 minutes, and led Nor'Easters to an undefeated record en route to the playoffs.

Coach of the Year

These coaches led their sides to remarkable records, despite a multitude of things in their way. Here are your nominees for Coach of the Year:

Mark McKeever, One Knoxville SC: A season removed from winning a League Two title with the Des Moines Menace, Mark McKeever joined the new club in Knoxville. He brought with him several years of League Two experience, as well as several players that had played in the competition before. He led One Knoxville to an 11-2-1 record and a South Central Division title.

Kevin Nuss, Ocean City Nor'easters: One of two coaches to lead an undefeated Eastern Conference side, Nuss continued an unbeaten streak that stretched back to 2019. He led the Nor'easters to a Mid-Atlantic division title, with an 11-0-3 record, winning the division by a full twelve points.

Dean Johnson, Des Moines Menace: Taking the reins at a defending champion and being just as good the following year is as impressive of a feat as there is. That's what Johnson did this year, as the Menace remained undefeated this regular season, backing up their one-loss season last year.

Michael Hannon, Project 51O: USL League Two is comprised of mostly college-age players looking to find a pathway to pro soccer in the summer. Project 51O, however, boasts one of the youngest rosters in the League, regularly starting players under 18 years old. Not only did they play - they won matches. Project 51O took the Southwest Division crown, starting what will be an impressive multiple-year endeavor for Project 51O.

Chris Whalley, Lionsbridge FC: The regular season championship rests in Newport News, Virginia after Lionsbridge FC went 12-0-2 on the year. They won the Chesapeake Division by 10 league points, putting an exclamation on the dominant season from Whalley and the Lions.

Guilherme Henry, Nona FC: Another side playing their first season in USL League Two, and it was an excellent one in Central Florida for Henry and Nona FC. A 12-1-1 record was one of the best in the league, and they dominated the Southeastern Division en route to being the Southern Conference's top seed.

Young Player of the Year

M Albi Ndrenika, Christos FC: Ndrenika was one of the statistical leaders of a Christos FC team that made the playoffs. The 18-year-old came second on the team with five goals, and added two assists to his tally. Ndrenika was a key piece to Christos success, and he'll take that ability to the University of Maryland this year.

F William Lorentz, NC Fusion U-23: The youngest player on our list, Lorentz appeared in eight matches for NC Fusion U-23, who find themselves in the midst of another deep playoff run. The midfielder pitched in an assist for his very successful side, and added the fourth goal against Charlotte Independence in their Open Cup win.

D Bryce Swinehart, Charlotte Eagles: Swinehart was one of the key contributors for a Charlotte Eagles team that barely missed out on the playoffs. From the right back position, Swinehart put up two goals and an assist in nine appearances for the club. Swinehart committed to play for Liberty last year, and this experience with the Eagles will help him chase a professional future.

M Cooper Flax, Manhattan SC: In six appearances for the Metropolitan Division winners, Flax contributed a goal and an assist on the season. He played a big part on the team at the beginning of June, playing extended minutes in wins over Hudson Valley Hammers, Long Island Rough Riders and Morris Elite SC.

Defender of the Year

These players were stalwarts for their sides, and sometimes, even turned on the attack to contribute. Here are your Defender of the Year nominees:

Samory Powder, Hudson Valley Hammers: What else to say about Powder? He's also a nominee for our Player of the Year award, as his six goals and six assists from the right back position were absolutely critical for a solid Hudson Valley side.

Finn McRobb, One Knoxville SC: The big man at the back for One Knoxville SC, 6'3 McRobb was an imposing presence to anyone that wished to attack the Knoxville goal. One Knox kept four clean sheets under his watch - and his three goals don't hurt either.

Lesia Thetsane, Ballard FC: Another Player of the Year candidate, the Lesotho national team player was a hawk on the ball to anyone wishing to charge up the right side. His tracking, ball-winning and ability to advance it was a critical piece to both the Ballard defense and attack.

Moise Bombito, Seacoast United Phantoms: The best defender on one of the best defensive teams in the league, if not the best, Bombito played a major part in the Phantoms' success. All but one game at home was a clean sheet, and Bombito added three goals to his tally in addition to the rock solid defense.

Benjamin Wiemann, NC Fusion U-23: Wiemann played all 90 minutes of every NC Fusion U-23 match, one of the best defensive teams in the league. He was a rock at the back for five clean sheets, including an 8-0 domination of Wake FC. He also pitched in two assists for his efforts.