United will look to maintain unbeaten record over Lehigh Valley 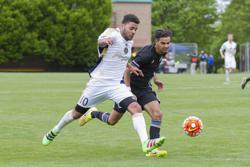 Wednesday night’s match will be the clubs’ second meeting of the season. Reading has yet to lose to their nearest neighbors.

In the last meeting between the teams, Reading scored a 1-0 victory in the season’s opening match. Khori Bennett found the back of the net inside the game’s first minute for the match’s only goal. The Reading defense stifled Lehigh Valley, allowing the hosts just four shots in the match.

Reading United (5-1-1) enter the match buoyed by their performance in Saturday’s 2-1 victory over the Jersey Express. Jelani Pieters opened the scoring just before halftime, weaving his way through the Jersey defense to score his first goal of the season. Hugo Delhommelle doubled Reading’s lead in the 50th minute when he scored from the penalty spot. Ben Beaury made nine saves, including three clutch stops in the game’s final five minutes to seal the win for Reading.

Reading will once again look to grab an early lead. United have found the back of the net inside the first fifteen minutes four times this campaign. Head Coach Stephen Hogan’s side has yet to lose a match in which they’ve scored first.

Lehigh Valley United (2-5-1) currently sit at the bottom of the division standings but have scored wins in two of their last three matches. Lehigh Valley have the most anemic attack in the Mid-Atlantic Division, scoring just five goals through the first eight games of the season.

Lehigh Valley claimed a 1-0 win at home over the Express on Sunday. Substitute Lachlan McLean came off the bench and scored the game winner for Lehigh Valley in the 82nd minute. Former Reading goalkeeper Kyle Morton made five saves to earn his first shutout of the season.

Reading will host long time rivals, the Ocean City Nor’easters in their next home match to be played on Saturday, June 25th at 7:00pm. Tickets for the game against Lehigh Valley are available at www.readingunitedac.com or on game day at the Don Thomas Stadium ticket office.