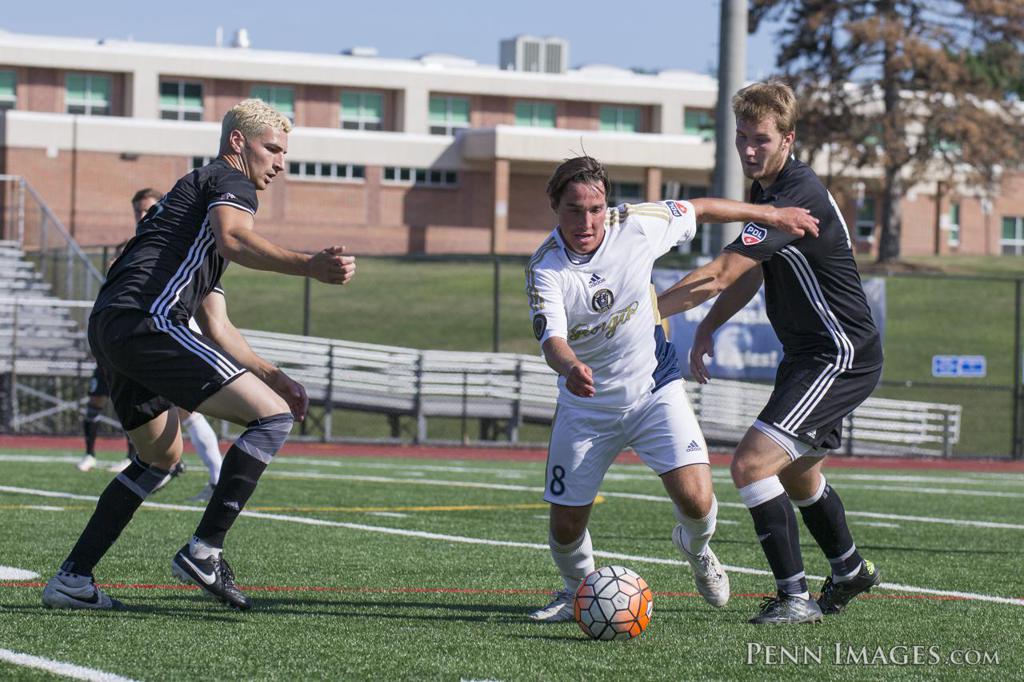 READING, PA (July 17, 2016) – Perhaps the only thing hotter than Reading United’s recent form was the mid-July heat wave that enveloped Exeter’s Don Thomas Stadium on Sunday night. With temperatures hovering in the mid-nineties, the Premier Development League’s Mid-Atlantic Division Champions beat the heat and their local rivals Lehigh Valley United to earn a clinical 1-0 victory to close out the regular season.

With an Eastern Conference First Round playoff match looming on Tuesday, Reading Head Coach Stephen Hogan made seven changes to his line-up that clinched the Mid-Atlantic Division title on Wednesday night in Newark, New Jersey. Mo Conde, Auston Maloney, Reece Weldon and Kutztown High School grad Pierre Reedy earned their first starts of the season, while Zach Zandi returned to the starting line-up for the first time since injuring his arm in Reading’s last match against Lehigh Valley on June 22nd. Ben Beaury got the starting goal for Reading.

Despite the blazing temperatures, Reading United started the match at a very high tempo with the new faces looking to make a good impression. In the 5th minute, Reedy played a good ball in to Zandi, who was cut down by Lehigh Valley goalkeeper Cameron Keys. Referee Dustin Killick awarded a penalty kick to the hosts.

Reading continued to pepper the Lehigh Valley goalkeeper through much of the first half, but Keys kept the Mid-Atlantic Division champions at bay.

Reading would finally get on the scoreboard in first half stoppage time. Zandi found space at the top of the Lehigh Valley penalty area and curled an effort on target. Keys made the initial save but the rebound fell straight to Jelani Pieters, who slammed the ball home to give the visitors a 1-0 lead going into halftime.

The second half was more of the same from the teams. Reading held much of the possession but struggled to find an insurance goal that would help see off their local rivals. Frantzdy Pierrot and Rayane Boukemia each had great chances to finish off Lehigh Valley in the game’s closing minutes, but failed to put their efforts on target.

Lehigh Valley tried to rally late, troubling Reading in second half stoppage time. The visitors had the chance for a last gasp equalizer as they won a free kick after a lunging challenge by Mac Curran felled Keys, who was out of goal and up field for a corner kick. Andy Adlard hit a firm shot straight into the waiting arms of Beaury as the the final whistle sounded.

For Reading, the 1-0 victory was the club’s fourth consecutive win and the tenth of the season. Beaury and the United defense posted the team’s sixth shutout of the 2016 season.

Hogan praised his squad’s overall performance in the regular season finale, “I thought the game was controlled, I thought we possessed it very well. I thought we could’ve moved the ball a little quicker down the right side. When the water break happened, we were telling them that and Jelani got his goal right before halftime.”

Reading will now host the Western Massachusetts Pioneers in the First Round of the PDL Eastern Conference Playoffs at Exeter’s Don Thomas Stadium on Tuesday, July 19th at 7:00pm. Tickets for the playoff game against Western Massachusetts are available at www.readingunitedac.com or on game day at the Don Thomas Stadium ticket office. Contact our ticket sales team at sales@readingunitedac.com for all your group needs.