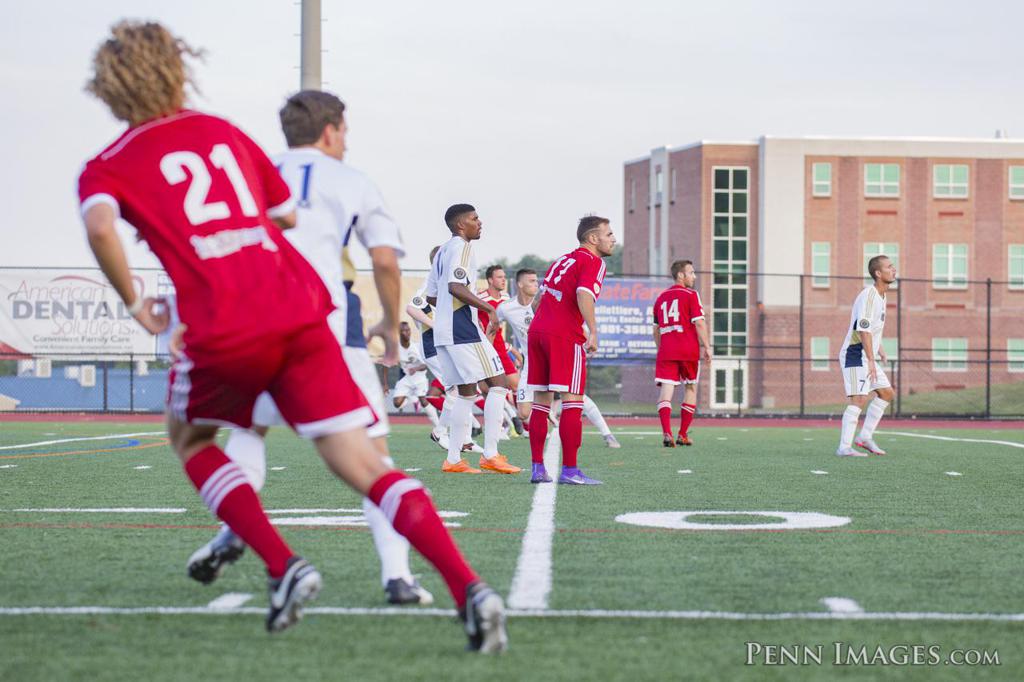 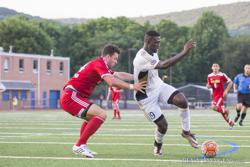 Sometimes you just have to believe.

Pegged back by an early goal, Reading United A.C. rallied to defeat the visiting Western Mass Pioneers, 3-1, in the opening round of the Premier Development League Playoffs. Goals by Frantzdy Pierrot, Rayane Boukemia and Ismael Noumansana as well as a dogged defensive effort that allowed the visitors just three shots helped United advance to the PDL Eastern Conference Championships for the first time since 2013.

The win was made more significant as Reading was selected by the league to host the Eastern Conference Championships on Saturday, July 23rd and Sunday, July 24th. All matches will be played at Exeter’s Don Thomas Stadium.

The opening moments of the match were played at a furious pace with chances at each end of the pitch. United had a golden opportunity to open the scoring in the 21st minute as a crossed was whipped into the Pioneers penalty area and found Noumansana at the back post. The forward’s close range blast was well saved by Western Mass goalkeeper Nick Zucco.

The Pioneers made United pay at the other end of the pitch moments later. In the 23rd minute, Max Viera collected a ball that was chipped over the Reading defense and unleashed a volley from 20 yards that looped into the back of the net to give the visitors a 1-0.

United quickly settled and began to control the pace of play. In the 35th minute, Boukemia sent in a cross from the right that Zucco failed to punch clear. Pierre Reedy rifled a shot towards an empty net only to see Ben Lamb scramble to clear the ball off the line to preserve the Pioneers lead.

Reading would get their equalizer in the 40th minute. Noumansana had time and space to whip in a low cross into the Pioneers penalty area. Pierrot made a run through the center channel and flicked the ball past Zucco to level the match at 1-1.

In the 71st minute, Pierrot began an attacking move through some excellent hold up play. The big forward played a ball out wide to Noumansana, who spotted Boukemia’s run through the middle. Taking Noumansana’s pass, the midfielder saw Zucco off his line and chipped the ball into the net to give the hosts a 2-1 lead.

Reading would put the game out of reach in the 90th minute. Gilbert Waso played a ball into Pierrot, who laid off a pass to Noumansana at the top of the area. The forward from Lenoir-Rhyne University made a quick move to create space and struck the ball with the outside of his boot and past Zucco to extend Reading’s lead to 3-1.

Seconds later, Boukemia had a chance to extend Reading lead after referee Jeroslaw Werel whistled for a Reading United penalty kick following a Pioneers hand ball in the box. The French midfielder was denied by Zucco, his college teammate, but the goal wasn’t needed as the referee blew for full time sending United to the Conference Championships.

Reading Head Coach Stephen Hogan was happy with his squad’s overall performance saying, “They came out great, it was what we wanted. We came out fast and we possessed the ball through Aaron Molloy and Rayane Boukemia. The two of them were fantastic. We fell asleep for ten seconds on a throw-in and they got a great goal. Hats off, it was a great strike. After that, we came in after they scored and dominated possession. I think we deserved the equalizer. I think Frantzdy Pierrot finished it fantastically.”

He continued by highlighting the team’s mentality, commenting, “Through the whole squad, there was always belief. We try to put simple messages into them, but there was always the belief that we’ll create chances and then we just needed the players to believe in themselves to put the ball into the net. There is a certain belief that no matter what happens in our goal, we’re definitely going to score in the opponent’s goal and that’s just continued to happen. I think there’s a lot of positivity going on, they’re very professional, very focused.”

Reading’s next match will take place on Saturday July 23rd at Exeter’s Don Thomas Stadium against an opponent to be determined. Tickets for the PDL Eastern Conference Championships are available at www.readingunitedac.com or on game day at the Don Thomas Stadium ticket office.