The fans have voted and named Reading United's Best XI!

In a process that started with Reading United's club management and former coaches nominating 28 former players who went on to professional careers, fans have selected the best eleven players to ever pull on a Reading jersey.

The Reading United Best XI feature four players who have played on their respective country's national team, an MLS Defender of the Year, an MLS Rookie of the Year, a MAC Hermann Trophy Winner, five MLS SuperDraft first round picks and four players with ties to Southeastern Pennsylvania.

Former Reading United Head Coach Brendan Burke, who recruited and coached many of United's Best XI said, " It is an honor to be associated with so many successful players over the years and these guys in many different ways are the class of the group and represent so many more who we are equally proud to have worked with."

Reading United Vice President Troy Snyder commented on the players selected as United's Best XI, saying, "Reading United has been fortunate to attract top young players from around the globe, especially those that represent their country in international competition. Our talent pool is deep, which makes it hard to name only eleven players to our fans’ All-Star Team. Congratulations to the group that has been selected." Snyder continued by offering United fans a tease of what lies ahead, stating, "Reading soccer fans keep your eyes and ears peeled for the next crop coming through Reading in 2017!"

Jeremy Vuolo played in 66 matches for Reading from 2005 through 2010, more than any player in club history. With Vuolo in net, Reading won three Mid-Atlantic Division titles, two Eastern Conference Championships and the 2009 Regular Season Championship. No player received more votes than Vuolo in Best XI voting.

Current Reading Head Coach Stephen Hogan, who played with Vuolo, said of his former teammate, "Jeremy, for me, was the best keeper, his presence and voice were second to none."

Keegan Rosenberry, who spent the 2013 and 2015 seasons with Reading shot to stardom after being drafted with the 3rd overall pick in the 2016 MLS SuperDraft. In a whirlwind rookie campaign, Rosenberry played every minute of every match for the Union, started the MLS All-Star Game and earned a call-up to the U.S. Men's National Team.

Damion Lowe, an imposing defender from Jamaica, spent two summers with Reading before being drafted by the Seattle Sounders with the 8th overall pick in the 2014 MLS SuperDraft. Lowe earned an NASL Young Player of the Year nomination while playing for Minnesota United in 2016. The 2013 All-PDL defender has featured for the Jamaican National Team and recently started for the Reggae Boyz in a friendly against the United States.

Matt Hedges was an All-PDL defender for Reading United in 2010, the first of two seasons with the club. Selected with the 11th overall pick in the MLS SuperDraft by FC Dallas, Hedges became the Hoops' captain in 2014 and earned MLS Best XI honors in 2015 and 2016. The towering defender anchored Dallas' backline, helping the club win the U.S. Open Cup and the Supporters Shield in 2016. He capped off the memorable year by being named MLS Defender of the Year and earning his second U.S. Men's National Team call-up. No Reading United alum has started more matches in Major League Soccer than Matt Hedges.

Hogan said of Hedges, "Matt was a monster of a center back. He could move and not a lot of players got by him.  He was a quiet lad, kept to himself, but he was a true pro when the whistle blew."

In 2012, Ray Gaddis became the first ever Reading United alum to start a match for the Philadelphia Union after spending the 2010 and 2011 PDL seasons with Reading. Gaddis has earned 114 starts in his five seasons with Philadelphia.

Hogan played alongside Gaddis in 2010 and said of his former teammate, "Ray was the fastest full back I have ever played with, and what pleasure to know he could arrive into space and get at opposition defenses within a second or two. His aggressive attitude on the field meant he rarely got beat.

Andrew Wenger remains the only Reading alum to have been selected with the first overall pick in the MLS SuperDraft. After spending the 2009 and 2010 PDL seasons with Reading, Wenger went on to become the 2011 MAC Hermann Trophy winner as college soccer's most outstanding player. The Montreal Impact selected Wenger with the top pick in 2012. The Lititz, PA native was traded to the Philadelphia Union and scored in his PPL Park debut. Wenger would help the Union reach the U.S. Open Cup in 2014 and 2015.

Luke Mulholland played in 30 matches and scored eight goals for Reading's dominant 2009 and 2010 teams. Working his way up the professional ranks, the Preston, England native was named the 2011 USL Rookie of the Year after a strong season with the Wilmington Hammerheads. The English midfielder earned NASL Best XI honors in 2012 with the Tampa Bay Rowdies before earning a contract with Major League Soccer's Real Salt Lake. Mulholland is now an integral piece in midfield for RSL, featuring in 93 matches and scoring 13 goals for the Claret and Cobalt.

Hogan spoke highly of Mulholland saying, "the best #8 I have ever played with. He did it all, got stuck in when he had to, arrived late in the box to finish chances, long range goals, it was a real pleasure to be on the field with him for two years. Good locker room guy too, his jokes were shocking but made everyone laugh."

Stephen Okai was dubbed "The Magician" throughout his two seasons with Reading United. Okai earned PDL All-Eastern Conference honors with United in 2011 & 2012 and was selected by the Philadelphia Union in the second round of the 2013 MLS SuperDraft. To date, the Ghanaian midfielder has played in 96 matches at the USL level, spending time with the Charlotte Eagles, Orange County Blues and Pittsburgh Riverhounds.

Leo Fernandes played with Reading  during the 2012 PDL season. The young midfielder, who was a three time America East Conference Midfielder of the Year, impressed in his time with Reading and was drafted by the Philadelphia Union in 2013. While on loan from the Union, Fernandes starred for the New York Cosmos en route to earning NASL Young Player of Year honors in 2015.

Berks County native Corey Hertzog played in 12 matches for Reading in 2009 and 2010. After his successful run with Reading, Hertzog led the NCAA in goals when he tallied 20 times for the Penn State Nittany Lions in 2010. The Antietam High School grad was selected by the New York Red Bulls with the 13th pick in the 2011 SuperDraft. Hertzog would go on to play for the Vancouver Whitecaps, Orlando City, Tampa Bay Rowdies and the Pittsburgh Riverhounds. With Pittsburgh, Hertzog struck for 13 goals in 2016 earning All-USL Second Team honors.

A teammate Hertzog's in 2009 and 2010, Hogan said, "Corey, scored goals out of nowhere! He would try anything to score."

C.J. Sapong helped lead Reading's potent attack in 2010. His four goals in eleven match helped earn the Manassas, Virginia native All-Eastern Conference honors. Sporting Kansas City made Sapong their first pick in the 2011 MLS SuperDraft and the forward paid immediate dividends, scoring five goals and winning the 2011 MLS Rookie of the Year award. Sapong would spend four years with Sporting Kansas City before moving to the Philadelphia Union in 2015. Sapong has netted 16 goals for the Union and his 36 career MLS goals is tops among all United alums.

Hogan enjoyed playing midfield behind Sapong, saying, "The ball could get punched into him and it was sticking, he was turning his defender or taken a foul from them.  C.J. was extremely hard to catch once he turned those defenders too." 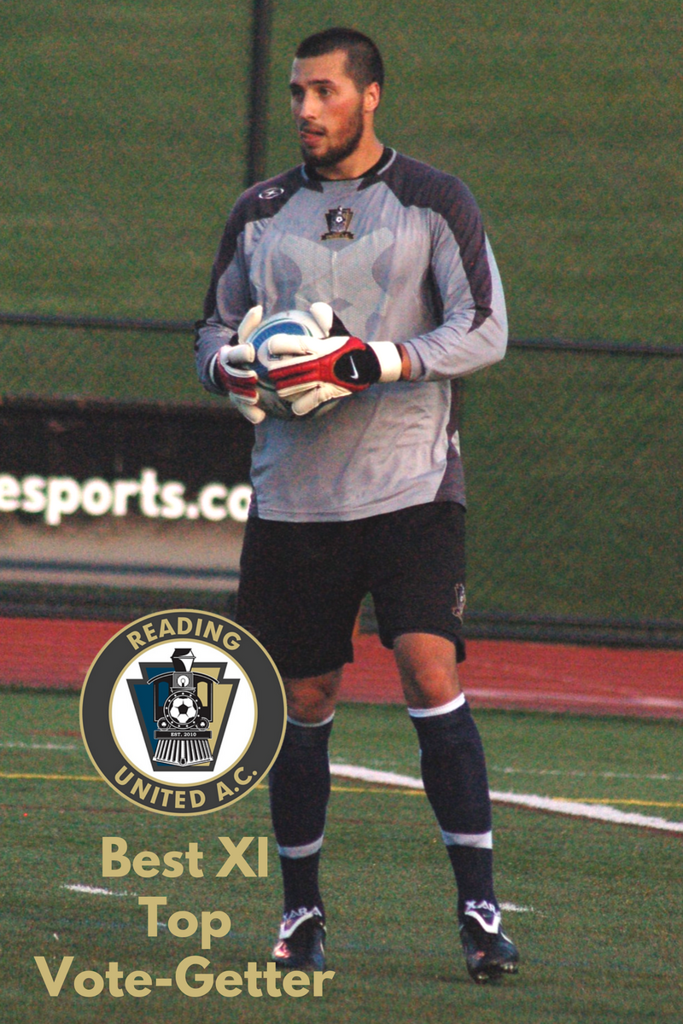 Jeremy Vuolo garnered the most votes in Best XI voting. Vuolo played in more matches for Reading than any player in club history.