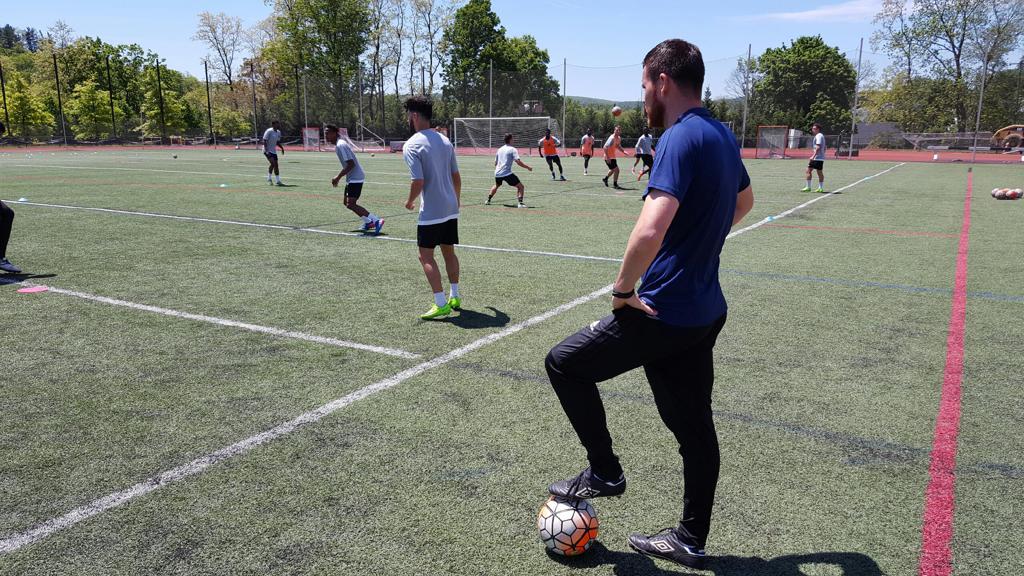 United assistant coach Alan McCann watches over a training session ahead of Wednesday nights Open Cup clash against the Cosmos.

READING, PA (May 16, 2017) – Reading United will look to continue their recent hot streak when they resume Lamar Hunt U.S. Open Cup action on Wednesday. They will host the two-time defending North American Soccer League Champions, the New York Cosmos at Albright College’s Shirk Stadium. The match, part of second round action, will kick off at 7:00 p.m.

United are in good form as they prepare for the Cosmos. Reading enter the match on the back of a 1-0 win over Clarkstown SC Eagles in the first round of the Open Cup. The club followed up on that win with an impressive 3-1 victory over Lehigh Valley United to open Premier Development League play. Standout forward Frantzdy Pierrot has goals in each of Reading’s first two matches and midfielder Hugo Delhommelle has three assists.

Reading United Assistant Coach Alan McCann knows his players are up for the match. They’re chomping at the bit, really. They really want to get out there and show what they’re made of. A lot of the boys see it as a window to get looked at by bigger and better prospects.” When asked what could be expected of his young squad of college prospects, McCann shared, “Creativity and excitement. We want to go out there and show exactly what we’re made of, show the talent that we’ve got here.”

Reading will be without influential midfielder Aaron Molloy as he will not be able to participate in the second round match after receiving a red card in the victory against Clarkstown. Even though he will not be able to play, he understands the magnitude of the match for his team. “The confidence level is high after the two victories, the team is really looking forward to this match. It is a big game against a big club,” said Molloy.

The New York Cosmos are coming off a championship season in 2016 and coach Giovanni Savarese will look to continue their recent success. They have started their NASL campaign with a 3-3-1 record following their 4-3 victory over Puerto Rico FC at the weekend. This will be their first match in Lamar U.S. Open Cup action. Last year, the Cosmos enjoyed success in this tournament making it to the Round of 16. They defeated New York City F.C. in fourth round action, but then fell to the New England Revolution.

Reading United and the New York Cosmos have a connection on the field. Cosmos goalkeeper Brian Holt earned All-PDL Eastern Conference honors after featuring in every match for United during the 2011 season. Former Reading United stars Keasel Broome, Leo Fernandes and Jimmy Ockford have all won the NASL Championship while playing for the Cosmos in recent years.

Players to watch in this match are United’s Delhommelle and New York midfielder Javi Marquez. Delhommelle has been brilliant for Reading so far this season. He posted two assists and helped control play in Reading’s PDL opener against Lehigh Valley United. The Syracuse bound junior will be one of the key players in Reading United Head Coach Stephen Hogan’s plan to defeat the talented Cosmos. Marquez has started six matches for the Cosmos this season, posting two goals and an assist. This is his first season for New York after spending time with La Liga sides Mallorca, Elche and Granada and will be looking to make an impact. Two other players that will feature prominently in the Cosmos line-up are former Bethlehem Steel FC players Ryan Richter and Walter Restrepo.

Reading United will return to home on Saturday, May 27th when they welcome Mid-Atlantic Division rivals F.A. Euro to Don Thomas Stadium. Kickoff is set for 7:30pm with tickets available online. All United home matches throughout the 2017 PDL season will be played at Exeter Township Senior High School. Tickets for the all regular season matches are available at www.readingunitedac.com. Contact our ticket sales team at sales@readingunitedac.com for all your group needs.