United rally to earn 2-1 victory over Red Bulls U23

READING, PA (June 18, 2017) – The visiting New York Red Bulls U23s traveled to Exeter’s Don Thomas Stadium as one of the best teams in the Premier Development League with a perfect 7-0-0 record and the authors of Reading United’s lone defeat in league play in 2017. The division leaders left Reading with their first loss of campaign as United rallied past the Red Bulls with late goals from Marco Micaletto and Aaron Molloy to earn a crucial 2-1 victory.

Throughout the week leading up to the match against the Red Bulls U23s, the Reading United coaching staff drove home the importance of raising the intensity level of the match, to press New York and shake them out their high press system that has worked well for the Eastern Conference leaders through one half of the season. The United players executed the game plan, hurrying and harrassing the visitors throughout much of the games opening 45 minutes. The intense, physical nature of the match was evident during much of the first half as the teams combined for a staggering 20 fouls.

Though each side had good spells of possession in the first half of the match, neither team troubled the opposition’s goalkeeper as the sides went into half time knotted at 0-0.

Reading came flying out after the break as they tried to grab a lead over the unbeaten Red Bulls. Pierre Reedy tested New York goalkeeper Ben Lungaard with a strong effort in 47th minute after a good run into the box. Just two minutes later, Red Bulls midfielder Jose Aguinaga forced a clutch save from Reading goalkeeper Alex Bouillennec to keep the match scoreless.

In the 60th minute of the match, United’s Frantzdy Pierrot set up Reedy for Reading’s best scoring chance of the match to that point. Working down the right channel, Pierrot set a perfect cross across the face of goal that found Reedy in stride. The former Kutztown Area High School star struck a volleyed shot that Lungaard just managed to parry off the crossbar.

The league’s leading goal scorer made United pay for missing their scoring opportunities. New York defender Michael Kapitula forced a turnover deep in Reading territory and sent a low cross into the box. Red Bulls forward Brian White bodied up his defender and his clever back heel flick found it’s way into the back of the net to hand the Red Bulls a 1-0 lead midway through the second half. The goal was White’s tenth of the season.

New York’s goal forced Reading United Head Coach Stephen Hogan to bring offensive minded substitutes Jorge Guinovart, Jelani Pieters and Marco Micaletto into the game as the hosts scrambled to get something from the match. Those changes would pay dividends for Reading.

Pieters, using his pace, began an attacking move down the right flank as he rounded Kapitula before playing a pass to Micaletto. The midfielder from Reading, England took the ball and cut inside before unleashing a perfectly placed left footed drive to the back post to beat Lungaard and tie the match.

With the momentum on their side, United pressed their unbeaten guests as they looked for the match winner. As the clock moved closer to the ninety minute mark, the Red Bulls tried to clear out a long ball from the United defense. Second half substitute Evan Finnegan pressed a Red Bull defender into a poor clearance that fell to Molloy. The Irishman got the ball under control and unleashed a 30 yard strike that sailed just under the crossbar to hand United a late lead. It was Molloy’s third goal of the season.

“I had a couple of yards and I struck it. I’ve been working on that in training the past couple of days and it paid off,” a jubilant Molloy said of his game-winner following the match.

The Red Bulls would make a final desperate and ultimately fruitless effort to find the equalizer as Reading sent New York crashing to their first defeat of the season. For Reading, the victory was their fourth consecutive win in league play and fourth victory over a New York area team at home this season. United has previously beaten the Clarkstown SC Eagles, New York Cosmos and F.A. Euro at home this term. The win also helped Reading pull within six points of the Red Bulls U23s in the standings with United holding two games in hand over the division leaders.

After the match, a very happy Coach Stephen Hogan shared his thoughts on the big win over the Red Bulls saying, “We knew it was going to be a physical game, that was the first 45 minutes. It was pretty even with tackles flying in, fouls, it was a tight game. They had chances, we had chances. Second half, we started off well but they came into the match again, and to be honest they deserved to be in front.” Hogan continued, “Give credit to our coaches Alan McCann and James Beeston, they came up with the ideas for the substitutions and it paid off. Just before Marco hit the ball we were saying ‘do something special’. Marco’s goal was unbelievable, he couldn’t have put that ball any more in the corner and then to top that, Aaron comes up with the absolute screamer from distance.” 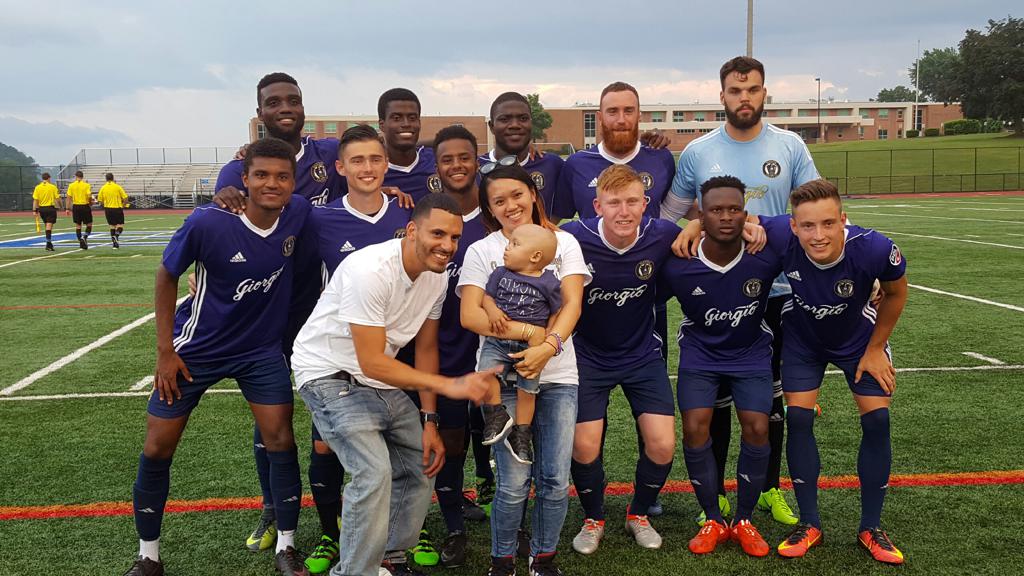