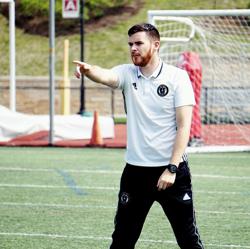 Coach McCann prepares his side for the U.S. Open Cup match against Christos.

READING, PA (May 8, 2018) – On Wednesday, Reading United A.C. will host their U.S. Open Cup first round match against Christos FC, in a clash of squads who had remarkable runs in last year’s edition of the tournament. Kick-off is set for 7:00 p.m. at Alvernia University Stadium in Reading.

Christos FC had a historic run in the 2017 Lamar Hunt U.S Open Cup. They advanced to the fourth round of the competition before Major League Soccer’s D.C. United ended their Cinderella run. In their first round matchup, they defeated Fredericksburg FC, 3-0. They shocked fans all over the country when they beat, USL side Richmond Kickers, 1-0. They continued their run when they got the best of Chicago FC United in the third round.

United head into their tenth consecutive U.S. Open Cup berth, which is an amateur record. Last year, United advanced to the third round of the competition before falling to long time Open Cup rivals, the Harrisburg City Islanders. Reading United started their run last year by defeating NPSL side Clarkstown SC Eagles, 1-0, on a goal by Frantzdy Pierrot. In the second round, Reading stunned the soccer world by defeating the defending North American Soccer League champions, the New York Cosmos, 3-2.

New Reading United Head Coach Alan McCann can rely on a talented core of returning players as the club faces a formidible challenge from Christos in United’s first competitive match of 2018. Returning Premier Development League Young Player of the Year Aaron Molloy will be a player to watch in this matchup after coming off a strong first campaign with Pennsylvania State University, while returning defenders Lamine Conte and Mo Conde will anchor the Reading defense.

Coach McCann is pleased with the progress his squad is making ahead of the match, saying, “The group has been getting to know each other quickly and the sessions have been intense. We believe we're in a good mindset going into tomorrow's game.”

Tickets to Reading United’s match against Christos are only $5.00 and will be available at the Alvernia University Stadium box office.

The winner of the matchup will move on to challenge the Richmond Kickers, a United Soccer League club, in the second round of the Lamar Hunt U.S. Open Cup. If Reading United defeat Christos, they will host the Kickers next Wednesday, May 16th at Alvernia University at a time to be determined.