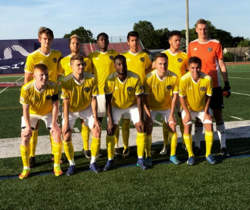 READING, PA (June 12, 2018) – Reading United A.C (6-0-1) wrapped up the first half of the Premier Development League season with a clinical display of soccer on Tuesday evening, defeating their in-state rivals Lehigh Valley United, 3-0, to remain unbeaten in league play and claim sole possession of first place in the Mid-Atlantic Division. Midfielder Aaron Molloy recorded a first half brace, while Kalil El Medkhar added a third goal in the second half.

Reading United controlled play from the opening whistle, pinning Lehigh Valley in their half of the field in the early stages of the contest.

Reading captain Aaron Molloy opened the scoring in the 19th minute. Taking a pass from Alex Lipinski, Molloy settled the ball 25 yards from goal and hammered a low shot past Lehigh Valley goalkeeper Kevin Silva for his second goal of the season.

The hosts would add a second goal just before halftime. Reading won a penalty kick when midfielder Oscar Ramsay was taken down from behind in the penalty area by a Lehigh Valley defender in the 43rd minute. Molloy stepped up to take the spot kick and buried his chance to stake Reading to a 2-0 lead. It was Molloy’s third goal of the campaign.

Reading United would put the match out of reach early in the second half. Continuing to pile pressure on Lehigh Valley United’s struggling defensive unit, the hosts would bag a third goal in the 57th minute of play.

United midfield Oscar Ramsay nearly intercepted a poorly played pass from Lehigh Valley goalkeeper Kevin Silva to defender Zarin Tuten. Tuten then played a weak pass back to Silva but Reading forward Mark Forrest got there first and tried to knock the ball past the stranded goalkeeper. Silva just got a touch to Forrest’s attempt but the rebound fell back to Ramsey, who calmly slotted a pass to his right that Kalil El Medkhar smashed home to make it 3-0.

Reading continued to pile up chances with the three points secured, recording 14 second half shots and outshooting the worst offensive team in the PDL 24-2 over the ninety minutes.

The Reading United defense recorded it’s fifth shutout of the season in the win.

The win was also Reading United's sixth straight win over Lehigh Valley and pushes the club's record against their nearest rivals to 8-1-1.

After the match, team captain Aaron Molloy was delighted by his teammates performance, saying, “The Long Island game felt like a loss and we needed a reaction from the boys. We came out and won 3-0, so there’s nothing more we could ask from this result.”

Reading United assistant coach Shane Keely, filling in while Head Coach Alan McCann is away at a coaching license seminar, said of the win, "It's a massive win after coming off the Long Island game. We felt like we dropped two points there and I think we could've won that game. The lads wanted to fix that today and scoring three goals and keeping the clean sheet kind of said that. We're happy to take the three points and move on to Ocean City on Saturday."

Reading United have a short turnaround before welcoming long-time rivals, the Ocean City Nor’easters, to Gurski Stadium on Saturday, June 16th. Kickoff for the historic 46th meeting between the sides is set for 7:00pm. Reading United will be holding its annual Kicks Against Cancer Night on game day, with fans encouraged to bid on game worn jersey to raise money in the fight against cancer.